FREDERICKSBURG – It’s one thing to talk the talk. It’s totally another to walk the walk.

Not only has the Northern Lebanon boys’ basketball team backed up the preseason rhetoric, it has also unlocked the secret to winning.

On Wednesday night during the opening round of their annual holiday tournament, the Vikings extended their early season success with a 66-55 triumph over Daniel Boone. After shrugging off an uninspired start, Northern Lebanon outscored Daniel Boone 33-12 over the middle two quarters of action.

Now 7-1 and owners of their best start in recent memory, the Vikings will take on Penn Manor, Thursday at 7:30 p.m. in the tournament’s championship game. Daniel Boone will meet Schuylkill Valley at 6 p.m. in the consolation contest.

“Not with the injuries, to be very honest,” said Northern Lebanon head coach Chris George, when asked if he saw this start coming. “And Cam Gensler has only played in half of our games. It says a lot about the role kids, the kids who stepped up.

“Caleb (Light) is doing it on both sides of the court,” continued George. “And (Alex) Yeager is ready to go off any second. The role guys have been a pleasant surprise. I thought we had it in us. Once the injuries went down, our expectations changed a little bit.”

“We come into games knowing the other guys are looking at our record, but saying they’re going to beat us,” said Yeager, who poured in a game-high 24 points. “Coming into the season, we had really high hopes. We knew we’d be contenders for the section (Three of the Lancaster-Lebanon League). We just have guys who are playing great, and it’s team basketball.”

With Yeager netting the Vikings’ first 11 points, the home side raced out to an 11-5 lead. But Daniel Boone ran off the final 11 points of the opening period to open a 16-11 margin.

“No disrespect to Boone,” said George. “They’re struggling a little bit. But for us, we have to give the same effort against an up-and-coming team. We challenged them (his players) to do it. Early on, they didn’t quite bring it. We weren’t super sharp.”

“For some reason, we come out slow,” said Yeager. “But we really stepped it up in the second half. And we played well, as a team.

“Every game for us is important,” added Yeager. “We’ve got something going this year. We haven’t had a record like this in a while.”

Northern Lebanon performed much better in the second quarter.

“I felt we did alright,” said Yeager. “I thought we could’ve done better defensively. We gave up too many points. But we got buckets from a lot of different guys.”

The Vikings attempted 21 free throws and made 12 of them.

“We had stretches where we shot the ball well,” said George. “We didn’t settle for threes. Alex came out hot and he looked to continue to attack. Early on, we weren’t drawing the fouls. We did a better job in the second half attacking the rim.

“We were on them (his players at halftime) for a lack of focus on defense,” George added. “It wasn’t one guy. They were losing their focus. If you lose focus, the ball tends to find you. You’re going to get exposed when you fall asleep.”

“Caleb and I have been playing basketball for a long time,” said Yeager. “It’s a friendship thing. We’ve been looking for each other since the sixth grade. It’s awesome to be able to play with your best friends and win games.”

The Vikings removed any doubt about the outcome in the third stanza.

Late in the period, Northern Lebanon scored eight unanswered points to extend its lead to 42-26. Yeager, Trader, Henry Hubbard and Thomas Folmer accounted for points in the spurt.

“I don’t put a lot of stock in winning and losing,” said George. “We try to get better every game. If we can do all the things, the score tends to take care of itself. They (Daniel Boone) have some good athletes on that team. We’re guard-heavy. We’ve got play the right way.”

“I think of myself as a leader on this team,” said Yeager. “Everybody has stepped up. They look to me when we need a bucket. We’re playing really good team basketball now, and our record proves it.”

Another inside move from Gensler 36 seconds into the final quarter pushed the Vikings’ lead to 46-30.

“I don’t know,” said George, when asked the last time the Vikings were off to a 7-1 start. “You’ve probably got to go back 25-30 years. Yeah, it’s been a while. But if you look at our schedule, in the second half, we’re going to find out.

“It’s fun. It’s exciting,” added George. “These guys have been saying for years that they’re jealous. Everyone in the community talks about the girls. When you include wrestling, our winter teams are having quite the success. The football team had a great fall and I think sometimes some of that starts to carry over.”

To purchase image in this article email jkfalk2005@yahoo.com, or to view more go to: https://lebanonsportsbuzz.com/photo-gallery/. 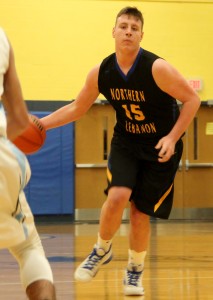