6 years ago
How Good Can Number 33 Make the Group Around Him?

That was true as much last night as it’s been every night this season.

But Evan Horn will always be there for the Falcons.

On Wednesday evening at ‘The Cage’, Cedar Crest’s uneven performance typified its year to date, but the Falcons played well enough long enough to grind out a 59-49 Lancaster-Lebanon Section One triumph over Manheim Township. The Falcons righted their ship for good in the middle of the final quarter, after the Blue Streaks had whittled a 20-point CC lead down to one possession.

Not unlike many basketball clubs across the County, Cedar Crest, with virtually a new cast of characters, is in the midst of a transition period. But given their success over the past few years, the Falcons’ progress will be a bit more compelling to follow.

The two-time defending Lancaster-Lebanon League and Section One champions improved to 6-2 overall and 5-1 in the section, with the win. The loss dropped Manheim Township to 5-4 on the year and 4-2 in the circuit.

“I thought we played very well, in spurts,” said Cedar Crest head man Tommy Smith. “At times, we lost our focus and didn’t play as well. But overall I was impressed with what I saw. We’ve definitely played in spurts throughout the year, with a new group. It’s how we’ve been playing.

“It was a Section One game,” continued Smith. “It doesn’t matter at what time of the year it is. It’s a battle and it’s important. For us to meet our goals, it was important.”

After trailing 37-21 at the break, and by as many as 16 points in the middle of the third period, the Blue Streaks pulled to within 50-47 of the lead, with 4:43 to go. But the Falcons responded with a big Blake Thompson three-pointer, a subsequent free throw from Thompson and a driving lay-in from Cole Laney to jack their lead back to 56-47.

“I don’t think we played with as much focus or detail in the second half,” said Smith. “We built ourselves a lead, but defensively we did things out of character. We did a lot of gambling on defense.

A Horn three-pointer four minutes after halftime gave Cedar Crest a 42-26 margin. But the Blue Streaks tallied the next seven points to make it a nine-point game.

“I thought we played very well defensively,” said Smith. “We got defensive stops. Our game starts and ends with our defense. When we’re able to get in transition, it gives us energy. I thought we were very solid defensively.

“We’re definitely getting better defensively,” Smith added. “When we were fundamentally sound, we played very well. The one thing we’re working on is consistency, on both the offensive end and the defensive end. We were good at times, but bad at times.”

Horn and fellow senior Raymie Ferriera combined for 49 of the Falcons’ point total. Horn collected 23 on five deuces, a pair of treys and seven-of-ten free throwing, while Ferriera contributed 16 points.

Cedar Crest surrendered only three free thow attempts to the Blue Streaks and outscored them by 11 points there.

“No,” said Smith, when asked if the competitive Horn could ever do too much. “No concern. His whole career he’s always done what we needed him to do.

“They’re (the new cast) starting to grow up,” continued Smith. “It’s difficult because we’ve had six games and three practices. There’s things we need to work on in practice. They’re coming along. They want to be good. Every game we’re getting better.”

Following a back-and-forth opening six minutes, the Falcons ran off a devastating 19 straight points, to open a 31-13 bulge, on an inside move from Luis Minaya. Cedar Crest held Manheim Township without a score for a 6:47 span, and received eight points from Horn, six points from Ferriera and two from Thompson.

A minute later, the Falcons stretched their advantage to 35-15, courtesy of free throws by Kobe Bolanos.

“Our goals and aspirations don’t change,” said Smith. “We want to compete for the Section One championship. We want to play in the Lancaster-Lebanon League championship. If we do that, everything else will take care of itself. Every night is a battle. But I like where we’re at.

To purchase images in this article email jkfalk2005@yahoo.com, or to see more go to www.http://lebanonsportsbuzz.com/gallery-ten/. 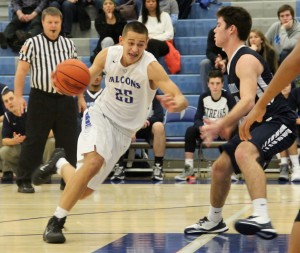