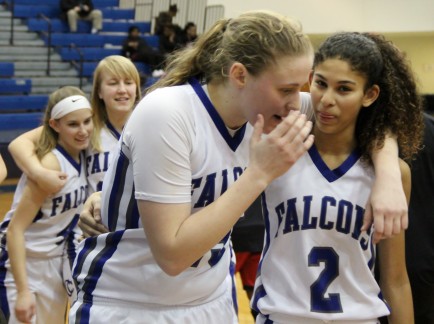 The Falcons' tradition of excellence on the hardwoods continues. ♦

NEFFSVILLE – Not sure if anyone associated with the current edition of the Cedar Crest girls’ basketball team is familiar with names like Ernie Firestone, Carla Munnion, Jen Nelson, Alyse Hoover or Aubrey Dellinger, or if they even care. But whether they know it or not, what these Falcons are accomplishing puts them right up there with some of CCHS’ most influential girls’ basketball figures of all time.

On Thursday night at Manheim Township High School, Cedar Crest enhanced its evolving legacy by beating McCaskey 49-43 in the Lancaster-Lebanon League championship game, without its best effort. Despite appearing lackadaisical and disinterested at times, the Falcons gained the upper hand late in the first half and then made enough plays and played enough defense to hold off the Red Tornado down the stretch.

For Cedar Crest, now 25-0, the league title was its second in three seasons and seventh overall. The Section One champion Falcons, who beat McCaskey for the 2014-15 L-L crown, defeated the Red Tornado twice during the regular season -63-47 in Lancaster on December 19th and 62-42 in South Lebanon on January 17th.

As the Lancaster-Lebanon League champions, Cedar Crest will see its next action as the second seed in the quarterfinals of the District Three Class AAAAAA tournament, on Thursday at home against either the same McCaskey club or Hempfield. With the setback, the Red Tornado slipped to 17-8 on the year.

“With this group of seniors, I think we’ve won 90 games,” said Cedar Crest head coach Jim Donmoyer. “We’ve been to three league finals and won two of them. This is a heck of a group. I can’t say enough about them.

“We’re 25-0, that says a lot about us,” said Falcon junior guard Rachel Witherite. “Coach says no one’s been 25-0. We care because we want to go down as the best team in (school) history. It’s always nice to be remembered.”

While the Falcons didn’t play to their high standards, the best they were all night was late in the second period. Down 16-12, Cedar Crest closed the first half on a 12-0 run that gave it a 24-16 halftime margin.

It all began with an Ariel Jones three-pointer, and it concluded with a Jones drive, three seconds before the break. In between, Alyssa Austin converted an old-fashion three-point play, Witherite nailed a floater and Raven Morgan took it hard to the cup.

Cedar Crest also held McCaskey without a point for a period of 2:45.

“It didn’t confuse us,” said Donmoyer of the zone defense the Red Tornado threw at the Falcons. “But we stood around. We didn’t dribble penetrate. We were a little stagnant. We made it easy for them to play defense. We’re ready for any game we play. But that 12-0 run before the half was the difference.

“To be honest, it was the best (closest) game we had against them (the Red Tornado),” added Donmoyer. “I told the kids it wasn’t going to be easy. I told them they (the Red Tornado) were going to come out and play hard. They have pride.”

“We beat them twice during the season,” said Witherite of the Red Tornado. “We underestimated them. We thought we could just walk on to the court and win. We didn’t play with a lot energy, but we won.”.

Courtesy of a three-pointer from Austin and a stick-back from the 6-1 post, Cedar Crest enjoyed a 29-22 lead two minutes into the second half. But neither side scored over the last 5:46 of the third period.

“Ariel didn’t have her ‘A’ game, but her ‘B’ game is pretty good,” said Donmoyer. “Alyssa came up big inside with some buckets, and Rachel hit some big shots. We’re truly a team. It’s Ariel and Alyssa all the time, but we have role players who can step up.

“She (Jones) didn’t have her best game,” Donmoyer continued. “She has been phenomenal all year. I wouldn’t say that was phenomenal. It was OK for tonight, but we’re going to need her to be better in districts. Our main thing all year has been our defense. We’ve been holding teams down. And our offense has been pretty good.”

“I thought we probably played one of our worst games of the year,” said Witherite. “You know you’re a good team when you don’t play well and pull out a win. We won. That’s all that matters.”

McCaskey closed to within 32-31 of Cedar Crest with 4:45 to go, but the Falcons never surrendered the lead. The Falcons righted their ship with a Witherite trifecta, four more points from Austin, a Gracen Donmoyer jumper, a foul shot by Jones and another 2:32 of stoppage time.

Two foul shots from Jones re-upped Cedar Crest’s advantage to 44-35 with 1:05 remaining, as the Falcons netted their final seven points at the charity stripe.

Austin notched 16 points and Witherite stepped up with a trio of three-pointers and 13 points. Jones finished with 11, five of which came from the free throw line as the Falcons were putting the game away.

The Falc0ns outscored the Red Tornado 18-3 from beyond the arc and 11-6 at the charity stripe.

“We didn’t execute like we normally do,” said Donmoyer. “We struggled. We’ve had stretches where we’ve struggled all year. But it’s all good. I couldn’t be any prouder of these girls. It’s been a great season so far. But we have a lot to go.”

“You have no idea how amazing this group of girls is,” said Witherite. “We love each other like family.”

With McCaskey hitting the offensive boards hard and the Falcons not shooting the ball well, Cedar Crest managed only four first-quarter points. But the Falcons began the second stanza with triples from Austin and Witherite, and a lay-in by Witherite to grab a 12-10 edge.

“This was legitimately the closest game we’ve been in all year,” said Donmoyer. “This will help us down the road. It was a good win.

“The section was our first goal and the league was our second goal,” concluded Donmoyer. “We caught an undefeated thing along the way. We want to win  a district championship, and we want to go to states. Things are good at Cedar Crest.”

Perhaps as good as they’ve ever been.

One thought on “Cedar Crest is Undefeated League Champion!”