LANCASTER –  The Cedar Crest boys’ basketball season has been a study in steadiness. The Falcons have been nothing, if not consistent.

But last night proved that there is an exception to every absolute.

On Friday evening at J.P. McCaskey High School, Red Tornado forward Makai Ortiz-Gray knocked down a game-winning 15-footer at the buzzer to lift the home side to a 60-58 upset victory over Cedar Crest. Out of a timeout with 2.2 seconds left, Ortiz-Gray accepted an in-bounds pass, took a quick dribble inside the circle and knocked down the decisive shot, despite apparently being fouled on the play.

It was Ortiz-Gray’s only bucket of the evening.

The result slowed, but did not derail, Cedar Crest’s drive to a Lancaster-Lebanon Section One championship. While it snapped the Falcons’ streak of ten wins in their last 11 outings, Cedar Crest, now 17-3 overall and 8-3 in the circuit, still controls its own destiny.

All the Falcons have to do to secure their third section crown in head coach Tom Smith’s tenure is win their remaining regular-season games against Penn Manor and Manheim Township. McCaskey, which had dropped a 64-52 decision to Cedar Crest in South Lebanon back on January 15th , improved to 9-9 on the year and 7-4 in the section.

“I just told them we didn’t play well enough to win,” said Smith of the post-game address to his troops. “There were plenty of plays throughout the course of the game that we didn’t execute. It was a one-possession game where we missed some plays earlier.

“We were on a nice little run,” continued Smith. “We were playing well. We played well for the first three quarters. But they made the plays down the stretch.”

After they had relinquished a 20-point second-quarter cushion, the Falcons regained the lead at 53-52 on two Logan Horn free throws with 2:32 remaining. Two foul shots from Jason Eberhart 35 seconds later made it 55-54 Crest, and a pair of charity tosses by Ileri Ayo-Faleye extended the Falcons’ lead to 57-54, with 1:40 to go.

But the Red Tornado responded with inside baskets from, first Isaiah Thomas, and then Brian McKenzie to knot the score at 58, with 23 ticks remaining. A Cedar Crest turnover set the stage for Ortiz-Gray’s heroics.

“We had fouls to give,” said Smith. “We wanted to foul on the bounce. We didn’t get it early and then it looked like he was fouled on the shot. You have games like that, when you don’t play a complete game.

“I could be wrong, but I don’t think the play was designed for him,” Smith added. “He’s a very good basketball player and he made a tough shot. He averages double-digits and he was on our scouting report.” 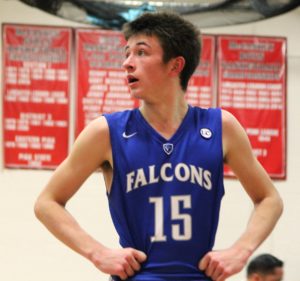 Cedar Crest led by double figures through most of the third quarter, including 39-21 on an inside move from Ayo-Faleye, 1:37 into the second half. A three-pointer by Horn gave the Falcons a 42-25 margin midway through the third stanza.

Even early in the fourth period, an Jaquan Andino driving lay-in had the Falcons ahead 48-38. But a 14-3 run propelled McCaskey to a 52-51 edge with less than three minutes to play.

“It was definitely both,” said Smith to the notion that the outcome was a result of his side not performing well and the home team playing well. “I give their guys credit. They made important shots down the stretch.

“That (the Falcons are still in the driver’s seat) was our point in there (the locker room),” added Smith. “We’ve got to fix things, but at the end of the day, we put ourselves in this good position. We still control our own destiny.”

Leading scorer Horn paced the Cedar Crest attack with 19 points, while teammate Trey Shutter canned 11 points. The Falcons outscored the Red Tornado 18-9 from beyond the arc, and 16-5 at the foul stripe.

“Sixteen-for-twenty-seven is not awful, but it’s not great,” said Smith of Crest’s free throwing. “But if we’re going to accomplish the things we want to accomplish, we’ve got to be better than that. “

Cedar Crest put on a clinic in the opening quarter.

An overwhelming 25-2 run gave the Falcons a 21-point lead early in the second period. During the eight-minute spurt, six different Falcons contributed points, including Horn, who dropped in ten, Shutter, who collected five and Eberhart, who tallied four.

“I thought we definitely started well,” said Smith. “We were executing offensively. But in the second and third quarters, we had a lot of one pass and done, and we didn’t get back on defense.

Despite the fact that McCaskey finally got itself going, the Falcons led comfortably though the second stanza.

A Shutter trey halfway through the quarter put Cedar Crest up 33-14. And thanks to a late lay-in from Eberhart , the Falcons led 35-21 at the break.

“That’s our first goal,” said Smith of the section championship. “It’s what we want every year. It starts from there. If we’re competing in our section, we’ll have a good seed in districts. You can’t goals Two and Three without getting One first.”