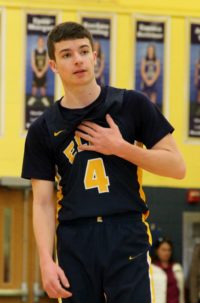 Stoic, focused and all business, Bryce Coletti doesn’t say a lot when he’s on the basketball floor. He’s too concerned about the task at hand.

But he does allow his play to speak for him.

This week, Coletti continued to lead the Elco boys’ basketball towards its postseason goals. In two games, during which the Raiders went 1-1, Coletti tallied a combined 24 points and contributed in a host of other ways.

On Friday night at Garden Spot High School, the junior combo guard pumped in 15 points, but it wasn’t enough to prevent Elco from falling to the Spartans, 51-48. Then on Saturday afternoon at Northern Lebanon, Coletti collected nine points in the Raiders’ 55-36 victory over the Vikings.

The two results left Coletti and the Raiders 12-8 overall and 8-4 in Section Four of the Lancaster-Lebanon League, and sewed up a league playoff spot for Elco.

Coletti has been a key cog all season long for the Raiders. He is averaging 10.5 points per game, and he’s Elco’s top free-throw shooter, one of the Raiders’ finest three-point shooters and one of their leading assist men.

During the spring season,  Coletti also stars on the baseball diamond for Elco.