LEBANON – It came down to the one thing that all great matches come down to – one great shot.

In this instance, a well-struck five-wood from the right rough that traveled all of 230 yards.

On Tuesday evening at the Lebanon Country Club, Brady Goodling struck the shot of the tournament at the 523-yard, par-five 15th hole and it earned he and partner Kyle Deisher the championship of the 69th annual W.B. Sullivan Better-ball-of-Partners golf tournament. Goodling’s extraordinary stroke left him with an eight-foot eagle putt, which he calmly sank to defeat the Lebanon County duo of John DiGiacomo and Mike Schmidt, Jr., one-up on the 19th hole, of the championship flight’s final match.

Tuesday’s action represented the resumption of a final match suspended by a severe thunderstorm on Sunday, July 28. When the lightning came on that day, the match was all square through 14 holes.

But all that Mother Nature could do was interrupt a match that could’ve easily gone either way, by the most miniscule of margins. That both sides played extremely well was exemplified by the fact that neither enjoyed more than a one-up advantage throughout the 19 holes of the final match.

And what made ‘the shot’ even more sweeter was the fact that Goodling and Deisher, teammates on the Monmouth University golf team, had advanced to the final match of the Sullivan in each of the past two years and lost.

“I had 230 yards uphill and I was trying to hit a high fade,” said Goodling. “I hit it exactly the way I wanted to. I thought it might run through the green, but it ended up stopping perfectly.

“There were a lot of ‘shots of the tournament’,” continued Goodling. “That was the ‘shot of the last hole’.”

“You can’t complain about losing to an eagle,” said DiGiacomo, the reigning Lebanon Country Club champion. “It was a phenomenal shot. I tried to make my shot (a 100-yard wedge). I knew I had to. I play out here a lot and you don’t see eagles on 15, especially under those circumstances.”

After his team had dodged a bullet on the final hole of regulation, Goodling blasted a tee shot on Number 15 that found the right rough. With Schmidt in the front bunker and DiGiacomo a football field short of the elevated green, Goodling stuck his second shot on the par-five eight feet below the cup.

“I get a lot more satisfaction winning with an eagle than a par,” said Goodling, an LCC member, a graduate of Manheim Central High School and a senior-to-be at Monmouth. “I’d rather have a good match and lose, than have a bad match and win. At 17 or 18, I said to Kyle, ‘Neither of us are giving each other anything.’ We just kept going back and forth.

“There’s a lot bouncing around in my head right now,” added Goodling. “It’s awesome to win this tournament. I’m really excited. There’s a lot to take in. It’s great to win the Sullivan, especially after being second the last two years. It’s a pretty prestigious tournament. It attracts a lot of great players.”

“It’s harder to be mad at yourself when it was such a good match,” said DiGiacomo. “It would be different if we lost to a par. But I wouldn’t have gotten to the finals without my partner. He’s a good player, and good looking too.”

“It’s unbelievable to make it to the finals of the Sullivan three years in-a-row,” said Schmidt of Goodling and Deisher. “Just getting there is difficult. I was really hoping the third time wouldn’t be the charm for them.

The match went to extra holes when, first DiGiacomo and then Schmidt, misfired on birdie attempts from 15 and 12 feet on the par-four 18th. But both Deisher and Goodling should be credited for making pars there, after pushing their drives right and into the tenth fairway.

“I thought Schmidty was going to make that putt,” said Goodling of the attempt on 18. “I thought it was going to be three years in-a-row (of disappointment). Kyle and I were talking and I said, ‘If we lose, we didn’t give it to them.’ We were both very nervous. We dodged a bullet.

“It’s (number 18) tough to par because the pin was on the right,” Goodling added. “We were just trying to get on the green to have birdie attempts. We had to hit it (their approach shots) over a 50-foot tree. We both had similar shots.”

Down a hole, Goodling and Deisher squared the match with a birdie at the 306-yard par-four 17th hole. Goodling drove his ball over the trees which guard the hole and on to the fringe of the green, chipped to within five feet and made a birdie.

Schmidt had forged that advantage for his side a hole earlier, at the par-four 16th, when he turned his big drive into a five-foot birdie putt with a nifty bump-and-run approach.

“I remember last year being up a couple holes through nine,” said Goodling of the 2013 championship match with Scott Mayne and Derek Price. “I remember not making many putts and kind of giving it to them. I was a little nervous, realizing on 18 that the match was in their (DiGiacomo and Schmidt’s) hands.”

“We had a chance on 17 and 18, to pretty much seal the deal,” said Schmidt. “But if we made every 15-footer we looked at, we wouldn’t be playing in the Sullivan.”

The opening hole of  Tuesday, the par-five 15th, was halved with birdies. Schmidt dropped a five-foot putt on top of Deisher’s 40-foot chip-in from the front of the green.

“The first time I thought about it (the resumption of the championship match) was yesterday when Kyle texted me,” said Goodling. “I didn’t really think about it all week. But I got here around 3:40 (p.m.) to warm up, putt, chip, hit some balls on the range. I wanted to make sure I was loose. You’ve got to be ready. I didn’t want to lose this year.”

The championship match actually began at 4 p.m. nine days earlier. On that particular Sunday, Goodling and Deisher took a one-up lead on the par-four fourth hole, only to have DiGiacomo and Schmidt square it at the par-three ninth.

A hole later at Number Ten, DiGiacomo and Schmidt assumed a one-up lead, before Goodling and Deisher responded at the par-four 11th. The two teams halved the next three holes, ahead of the threatening weather.

“I just want to thank Johnny for playing,” said Schmidt. “We were a pretty good fit. It was fun. It was enjoyable.” 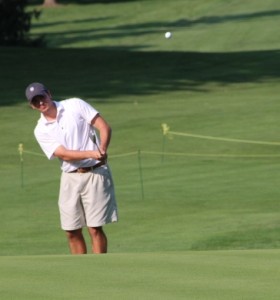