2 years ago
At South Hills, ‘Hanging Out’ Has Different Meaning

(Editor’s note: What follows is the initial installment of a summer-long series featuring Lebanon County’s recreational parks that last appeared on Lebanon Sports Buzz in 2017.)

Despite our continuous growth, we here in Lebanon County have always been more rural than urban. And because our ancestors had the foresight to put aside land purely for fun, we have been blessed with a wide array of recreational parks.

They are truly wonderful gifts, and ultimately the onus falls on us to enjoy them to the fullest.

No matter where one resides within the county, there is a recreational park less than a 15-minute drive away. But of the numerous municipal and non-municipal parks in Lebanon County, none is more centrally located – or situated in a more densely populated area – than South Hills.

Located on 123 sprawling acres in South Lebanon township, spanning South Lincoln Avenue and State Drive, South Hills is believed to be the most visited park in the county. And perhaps one of the reasons is that there’s so much going on there.

“I think the people in the community must think of it as an asset,” said Mike Kipp, South Hills Park’s Superintendent. “When people in the neighborhood sell their homes, they use South Hills Park as a selling point. I think it’s a tremendous thing for Lebanon County. A lot of communities would be glad to have this type of recreation area. I don’t know what else you could have. It’s a nice place to come to. 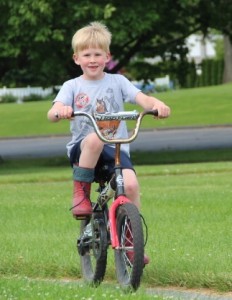 “A lot of people just come and walk,” continued Kipp. “Some people come for picnics and they bring their own entertainment, or they use what we have here. Some sit under the shade and relax. We have a lot of people who walk daily. Everybody seems to find something to do when they get here.”

If one can imagine an outdoor activity, conceivably it can be performed at South Hills Park.

South Hills is home to a 1.2-mile walking/running/bicycling trail, four tennis courts, a fully equipped playground and sandbox, eight pavilions, five softball/baseball fields, two volleyball courts, a golf driving range, an exercise area, a brand-new disc golf course, four large basketball courts and the Lebanon Friendship midget football program. But on any given day, visitors can also view Frisbees flying through the air, kites soaring among the clouds, soccer balls being kicked in the grass, even Easter eggs being hidden or daredevils sledding on snow-covered slopes, depending upon the time of the year.

“Just with school kids, we have hundreds of kids coming to the park,” said Kipp. “It would be tough to put a number on that (the overall visitors to South Hills). I’d put it in the thousands. I think I’ve got to agree with that (it’s the most visited park in Lebanon County). And I get around the county pretty good.

“I think it’s important to everyone’s health, to get outside and breath the fresh air,” Kipp continued. “We have people from the city come here and spend the whole day. Everyone knows exercise is important. A lot of people don’t like that we don’t allow dogs. We did years ago, but it became a problem. Right now, we don’t have a place to walk dogs.”

The rolling land that is now South Hills was donated to South Lebanon Township by the federal government. Once part of the Lebanon Veterans Administration Hospital grounds, South Hills was opened to the public in 1972.

It is operated and maintained by South Lebanon Township.

“It’s changed an awful  lot, just since I’ve been here,” said Kipp. “We got a new maintenance shed, one of the basketball courts is new, the tennis courts have been resurfaced and the bathroom facilities have been upgraded. We put in a memorial garden around the flagpole and we get so many good comments about the flower beds. It seems like there’s always something new.

“I just like it all, myself,” Kipp added. “I personally like the quiet area. I really like to sit where the new disc golf course is because it’s so peaceful and quiet there. It makes me feel good. It makes you feel relaxed. But probably my favorite area is overlooking the driving area, because the view is so good there.”

But despite all the traffic that South Hills gets, it’s always neat, manicured and well maintained. It’s a fact that is not lost on regular visitors.

“It’s a very enjoyable job,” said Kipp. “I live close by. I came here with the idea of sitting on a lawn mower all day. That lasted two years, until they needed someone to manage the park. I have good workers. I have a good staff. We try to keep it nice. I preach to the guys, ‘pick up the trash because trash grows.’

“I’ve always liked the outdoors,” added Kipp. “The guys who work for me treat it like their back yards. They take pride in what they do.”

As the grounds have matured, South Hills as a park has evolved. But its future appears as bright as its past.

“One thing we get a lot of requests for is soccer fields,” said Kipp. “There’s a big need for soccer fields. The land south of the park, which is now farmed, will be developed some day and the plan calls for soccer fields and more baseball fields.

“What I’d like to see is an enclosed pavilion with kitchen facilities and indoor bathrooms,” Kipp continued. “You could use it for a wedding reception, and it could be divided. It could be open or closed.”