(Editor’s Note: What follows is a feature story on the Reading Fightin Phils, which first appeared on Lebanon Sports Buzz in 2016)

READING – A storied past.

But those are just a few of the elements which create ‘good times’ at Reading Fightin Phils games.

Sure the baseball is great. But the Fightin Phils have managed to build something that has taken our national past time to the next level, transforming  it into an all-ages, entertainment experience. A place to make memories.

The Reading Fightin Phils are the Class AA minor-league affiliate of the parent Philadelphia Phillies – been so for the better part of the last five decades. And rarely have the Reading Phils enjoyed as much success on the field as they have this summer.

But that success can also be measured off the field, where the Reading Fightin’ Phils have become one of the best draws in all of minor league baseball. The secret? A family friendly atmosphere, a place for young adults to meet and hang out and a budget-conscious get-away.

“I guess it’s whatever you care for on your night out,” said Eric Scarcella, Reading’s Director of Public Relations and Media Relations. “We don’t try to make any one (baseball) or the other (between innings entertainment) more important. What we can offer is what goes on between innings. But people come out for multiple reasons.

“We try to be as family friendly as possible,” continued Scarcella. “We try to offer something for everyone in the group. The entertainment aspect is something you can control, beyond what goes on with the baseball. We have fans who specifically come out for that. They don’t care about the baseball game. We try to keep everything well within means, so everyone can afford it.”

A mere 45-minute drive east on Route 422 – depending upon traffic – a night-out at a Reading Fightin Phils’ game has been a traditional summer day trip for Lebanon residents for years. It has sort of become a way for local fans to check out future big Phillies’ stars, without having to drive that extra hour.

“I think the Lebanon market is extremely important,” said Scarcella. “We work with a lot of groups in Lebanon. It’s an interesting area because it falls between Hershey and Harrisburg. It’s not that far away. It’s a straight shot down 422. You guys have always been in our market. But over the last five years, we’ve made a more concerted effort to include Lebanon fans. I love talking Phillies in Lebanon.

“We try to reach out to anyone within an hour of Reading,” Scarcella continued. “It would include Lebanon. It would include Lancaster. All the way down the Route 422 corridor toward Philly. It is a community meeting point. But that hour-radius has become our bread and butter.”

Reading Fightin Phils games are inexpensive, a key element for families with limited disposable incomes. Tickets are priced from $5 for general admission to $29 for box seats, and concessions, team garb and memorabilia are also very wallet friendly.

The Reading Fightin Phils’ experience also includes a swimming pool in right field, a number of left- and center-field decks for leisurely viewing games and a midway-style concession ally that winds its way from beneath the grandstand to an area behind the first-base box seats. The between-innings happenings are more about contests, giveaways and promotions than they are about pure entertainment.

“I don’t think there’s any age group we target,” added Scarcella. “The entertainment is very family friendly, its for everyone, from grandmothers to grandchildren. We really cater to families. But we hope that anyone will come out to the ball game.”

Reading possesses a number of features about which to boast. First Energy Stadium, formerly Reading Municipal Stadium, is annually recognized as one of the best ball parks in minor league baseball. The 2016 campaign marks the 50th season in which Reading has been affiliated with Philadelphia.

At about 6,000 fans per home game, Reading continues to be one of the top drawing franchises in the minor leagues. And the Fightin’ Phils’ current record of 67-32 is the best in all of professional baseball.

“It’s better than ever,” said Scarcella of Reading’s relationship with Philadelphia. “It’s our 50th season of being affiliated with the Phillies. It’s very important to our success. It’s nice to be a part of that. You can come out and see future Phillies right here in your own backyard. It’s such a cool, unique and authentic story.

“It’s fun,” Scarcella added. “Winning for us is a lot of fun. We can’t control the players we get. If you have a winning season, it’s icing on the cake. It makes the ride so much fun.”

The history of professional baseball in Reading dates back to 1858 – a span of 158 years. Reading is the oldest franchise in the Class AA Eastern League, and in 2007, Reading welcomed its ten-millionth fan.

“I think it’s a fantastic story, especially for someone who grew up in this area where baseball has been so prominent,” said Scarcella. “There’s such a history of baseball in this area. I grew up here and I loved spending summers at the ball park. We’re so lucky to have it here. If these walls could talk, I’d love to hear everything they know.

“We hope to keep the positive going and rolling,” continued Scarcella. “If you haven’t been here and you’re a baseball fan, it’s something you should put on your bucket list.”

Given the Fightin’ Phils’ success and the level of talent currently in Reading, the future certainly seems quite bright for the major league club in Philadelphia.

“There was a time when people began to realize how big of an industry minor league baseball can be,” said Scarcella. “It’s great to see all the teams in Pennsylvania. It’s really a boom. It’s a great thing to have. I think the industry is trending in the right direction. It’s a more intimate affair than the major leagues. You’re right on top of the field. 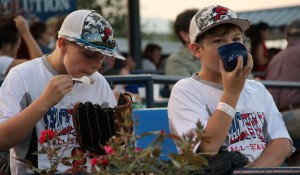