7 years ago
Quentin Riding Club: Where Ladies, Horses Come to Show Off

QUENTIN – The Quentin Riding Club is older than horse dirt. Perhaps the only thing more ancient is mankind’s relationship with his equine friend.

The Quentin Riding Club has been home to competitive horse showing and riding for more than 80 years. But what makes it even more unique is that it is one of only a handful of complete-service, horse-showing facilities remaining in the United States.

Located at 2500 Quentin Road, Route 72, a few miles south of Lebanon, the 40-acre Quentin Riding Club was formally founded in the early 1930s by a group of local businessmen as a recreation area for their horses. It didn’t take long for competitive horse showing to emerge.

But the origin of the Quentin Riding Club dates back even farther, to the time of the Robert Coleman family, the most influential clan in Lebanon County’s history. The Colemans maintained a farm on the grounds and imported Hackney horses, animals used to draw the carriages of the English aristocracy in the mid 1800s.

“There are two riding clubs in the United States,” said Donali Livinghouse, QRC’s horse show committee chairperson for the past 12 years. “One other than the Quentin Riding Club. There were others in past decades. There are horse show grounds, many of them, but they’re not a club like our’s. We’re the last of one of these. But there are many, many places to show horses. They might not have the barns we do.

“It’s been there a long, long time,” continued Livinghouse. “There’s a whole history there. Originally, it was for carriage horses, Hackney horses, imported from England. Why it became a club? I don’t know.”

“Horses are loyal, honest and complex,” said Livinghouse, a resident of Berks County. “Some might say they’re kind of crazy. They’re challenging. They smell good. They’re soft and they’re fluffy. They’re intelligent. They’re willing to please. They’re more like cats then they are like dogs. They’re absolutely beautiful. They love to move. They love to play. They like to have a job. They like to work. They don’t like to stand around and do nothing.

“The relationship between man and horses is ancient,” Livinghouse continued. “We’ve been doing it since the beginning of time. It’s the same as with any pet. They’re like your kids. You pay your vet bill before you go to the doctor yourself. People will always tell you that horses have a way of mind reading. If you’re upset, your horse will know you’re upset. If you’re happy, your horse will know you’re happy.”

The people who are drawn to the Quentin Riding Club come from as far away as New Jersey and Virginia and as near as Reading, Lancaster, Harrisburg and even Lebanon. They’re mostly affluent. They’re mostly women. And they’re mostly people who have had horsemanship passed down to them.

“Mostly our spectators are relatives of our exhibitors,” said Livinghouse. “If you asked them what brought them here, they would point to someone in the ring. It’s a great family place. The exhibitors are either very, very rich people, or they’re people who are horse poor. People who own horses and show horses don’t fall into a little box. People love horses. Once people get to know about them, they love them. And I’d say the majority are women.

“Shows are very different, they’re very varied,” added Livinghouse. “Our small shows are more of people practicing and getting ready for big shows. Big shows are more prestigious. It really depends on the size of the show. Eighty percent of the people at small shows are from the area. But when shows go into a weekend, or for two days, the competition is a lot heavier and only about 40 percent are local and 60 percent are from out of state.”

So the Quentin Riding Club is a destination. And when people come to Quentin and the surrounding areas, it has a positive effect on the local economy.

“They do go to the restaurants,” said Livinghouse. “They do go shopping. They stay at local hotels when there’s overnight shows. Yes, there is a very positive effect on the local economy. For a two-day horse show, it would cost me $500 per horse to show my horses, and that would include things like transportation and entry fees. There is a lot of money floating around.”

Make no mistake about the fact that horse showing is a sport. A different kind of sport. But a sport, nonetheless.

“A show is a competition,” Livinghouse said. “When you go to horse shows, they’re competing against each other. And there’s many different classes. It’s kind of like dancing. There’s so many types of dance and different types of steps. At ever competition, people are invited to watch, which makes it a show. But there’s also team work involved.

“Many, many, many of the horses enjoy the shows,” added Livinghouse. “Not all of them, but you can tell by their expressions. You can tell because they cooperate. They enjoy doing it. They enjoy having a job. They enjoy showing.”

And just like other sports, the popularity of horse showing is feeling the pinch of the economy, and suffering from a society which is more complex, one in which there are so many other things for its members to do.

“Shows are much smaller than they ever were,” said Livinghouse. “It’s an expensive sport. It’s a very time-consuming sport. An event that had 20 entries in the (19)70s, now sometimes have to be terminated. Our smaller venues have really suffered. I think it’s both things (the economy and the way society has evolved). When horse people get together we say, ‘Do you remember when we were kids?’ That’s all we did, was our horses. Many people are spread out more now.

“I don’t know what the future holds,” Livinghouse continued. “I hope it doesn’t diminish like it has. People I know are going more into trail riding than the serious showing. Yeah, it makes me sad. It makes all horse people sad. When horse people sit around and talk, they talk about the good old days. But I don’t think it will ever disappear completely.”

Perhaps what the sport needs is an infusion of more people like Livinghouse.

“The restaurant/clubhouse/bar are kind of a different entity from the grounds,” concluded Livinghouse. “Events outside in the past had as many as 60 weekend events a year. Now we’re down to about 30 weekend events or one-day events, and they’re not just horse related. But there’s a capacity to do other things.”

To purchase images in this article email jkfalk2005@yahoo.com, or to see more go to www.http://lebanonsportsbuzz.com/gallery-nine/. 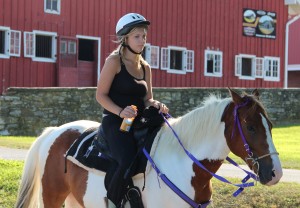