2 years ago
By Upsetting Top Seed, Cougars Show What They’re Made of 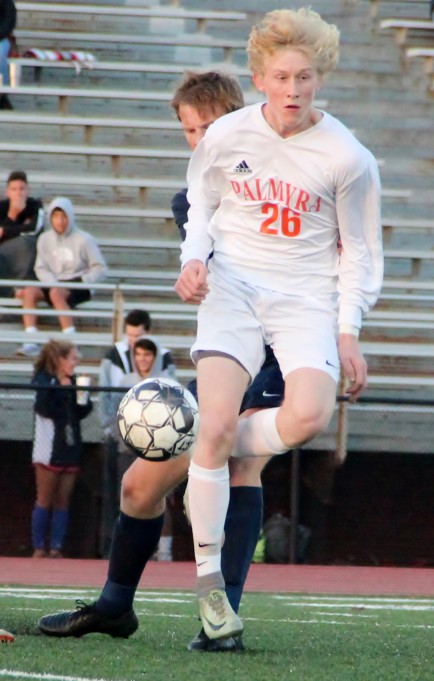 NEFFSVILLE – The visitors may have underachieved a little bit throughout the season.

But the Palmyra boys’ soccer team picked the perfect time to play the underdog, us-against-the-world card. And the Cougars played it to the hilt.

On a breezy Tuesday evening at Manheim Township High School, Palmyra pulled a monumental, come-from-behind upset in the opening round of the District Three Class AAAA playoffs, by edging the hometown Blue Streaks in penalty kicks. The match was tied at two at the end of regulation, and after the two sides fought through two score-less 15-minute overtime sessions, the 16th-seeded Cougars outscored the top-seeded Blue Streaks 5-4 in penalty kicks.

It was an exhilarating ending to a well-played, action-packed high school playoff match.

“You can look at it that way,” said Palmyra head coach Jerry Hoffsmith of the David-vs-Goliath scenario. “We’re in districts now. It doesn’t matter what we did in the regular season. We focused on this one, and they (his players) came out and played like they can. This is a joint effort between players and the coaching staff. The players get along, and they work hard.

We knew all season we had something special,” continued Hoffsmith. “We had a lot of 1-0 games this season. I told them (his players) that we’ve started a new season. It doesn’t matter if you’re the number-one seed or the 16-seed, it’s the same opportunity for everyone.”

“That’s a really good team,” said Caton of the Blue Streaks. “That’s probably one of the best teams we’ve played all year. I don’t know if I’d call it an upset. We’re a good team too. We can play with anyone. It comes down to heart.”

With the win, Palmyra improved to 12-6-1 overall and advanced to Saturday’s quarters opposite ninth-seeded Central Dauphin, a 1-0 winner over Southwestern, at a site and time to be determined. Top-seeded Manheim Township concluded its campaign at 13-5.

“Honestly, it’s the luck of the draw,” said Hoffsmith of the penalty kick portion of the contest. “Their (the Blue Streaks’) best player missed a PK. When I look at the game, we should’ve won in regulation. The boys just played unbelievable.

“After two 15-minute overtimes, if you don’t do it then, then you’ve got to do it in PKs,” added Hoffsmith. “It’s tough for those guys (the Blue Streaks). But I feel like we outplayed them.”

“It (PKs) was really intense,” said Caton. “We just had to calm it down after the game was over. That’s what PKs are all about – calming down and making them.”

Caton scored both Palmyra goals, after the Cougars had fallen behind 2-0 late in the first half. His initial tally seemed to give the Cougars a spark, and his second, which came with 17:20 remaining in regulation, ultimately sent the contest to ‘bonus soccer’.

It was 5:14 before halftime – and 12 minutes after Manheim Township had potted its second tally – that Caton got Palmyra on the scoreboard. After accepting a feed from Higgins in the middle of the pitch, Caton one-touched a shot inside the left post.

“It’s just T.J. in general,” said Hoffsmith. “He’s gone from a good player to a special player this year. He leads the team in a special way. He shows it in a great way. But it took a team effort to do what we did tonight.

“When it was 2-0 we weren’t feeling like we were out of it,” Hoffsmith added. “But we needed something to happen.”

“It was the team,” said Caton. “That was it. I couldn’t have scored those goals without my teammates.

“We got down early and the whole team stepped up,” added Caton. “Emotions were high. But we’re all together as a team.”

Early on, it appeared that the seeds may hold true to form.

Manheim Township grabbed a 1-0 lead 7:07 into the contest, when Nolan Ross sent teammate Colton Pierson ahead on the left wing. Pierson beat a pair of Cougar defenders, then ripped a blast past Palmyra net-minder Jordan Smith.

Sixteen minutes later the Blue Streaks added to their advantage, as Ross this time fed Andrea Disomma. From the right, Disomma beat Smith with a low shot inside the near post.

“I thought we had a good, solid, total game,” said Hoffsmith. “But there were moments we didn’t play as well.”

“We started slow, but we definitely controlled the game,” said Caton. “It got better as the match went on.

“That was a really good game,” continued Caton. “It just went our way.”

Both sides generated a number of dangerous opportunities throughout the match, as each side was credited with 13 shots. Included in the Cougars’ near-misses were McCarty stoning Caton on a first-half penalty kick – with the Blue Streaks protecting a 2-0 lead – and a Palmyra shot caroming off the far post, off a first-overtime corner kick.

“Absolutely. It was an exciting game,” said Hoffsmith. “It was intense the whole game.”

“We had a couple of losses that we should’ve had (won),” said Caton of the regular season. “We just snuck in (to districts). We shouldn’t have been in that position (the 16th-seed). But we played a lot of good teams.”