3 years ago
Northern Lebanon is Down to Its Last Loss

READING – Could Northern Lebanon beat Berks Catholic if it played well? The Viking would’ve loved to find out.

On Thursday evening, the Vikings did not play their best game against an opponent that they needed to, and fell 52-34 at Berks Catholic in the quarterfinal round of the District Three Class AAAA basketball playoffs. Northern Lebanon hung around for about a half, before the mighty Saints hit it with a devastating 18-0 run that began late in the second quarter and spilled over into the third.

The setback, the Vikings’ fifth in their last six outings, was debilitating but not crippling. Seventh-seeded Northern Lebanon, now 16-9 overall, can still qualify for the PIAA tournament by winning its next two games.

The Vikings will see action again on Monday at 5 p.m. at Lebanon High School in a Class AAAA elimination game.

Second-seeded Berks Catholic, one of the favorites in the District Three Class AAAA postseason, moved into Monday’s semifinal round with a 24-2 mark.

“I don’t think we played our best game and lost by 20,” said Northern Lebanon head coach Chris George. “We gave them a run there. I think they (the Saints) know they were in a game. Clearly our goal wasn’t to be tied in the second quarter. I feel bad. I feel frustrated. We have been in this spot before. It’s going to be interesting to see how we react in these games, and how we react going forward.

“We put up on the board, ‘Turnovers and Toughness’,” continued George. “For most of the first half, we answered the toughness part. We need to rely on our guard play. And they (the Saints) out played us in that aspect.”

Northern Lebanon got off to a somewhat shaky start, but recovered nicely.

Berks Catholic led 12-3 six minutes in. But before the opening quarter was out, senior Caleb Light drained a three-pointer and running mate Alex Yeager scored on a pull-up to draw the Vikings to within four points of the lead.

“We were sloppy offensively in the first half,” said George. “They’re (the Saints) one of the best teams in the area defensively. We did a nice job of being patient in spots. But the turnovers were a back breaker.

“We tried spreading them out,” George added. “We tried to pull guys away from the rim. But if you’re guard-heavy, you should be strong with the ball.”

A switch to a zone defense early in the second quarter ignited a 9-2 Northern Lebanon run that turned a 14-8 deficit into a 17-16 edge. Light was responsible for five of those points, while Cameron Gensler accounted for the other four.

It would prove to be the Vikings’ only lead of the evening.

Berks Catholic tallied the final ten points of the second quarter, including a steal and lay-in with eight seconds remaining, after it appeared Northern Lebanon was holding for the final shot of the half. The Saints also netted the first eight points of the third quarter to open a 34-17 bulge.

The Vikings went without a point for a total span of 7:18.

“I think this team’s comparable to Lancaster Catholic,” said George of Berks Catholic. “We played with teams like this all year. I think they (his players) were excited. I thought we let it get away. You know how many points they’re going to give up. They’re (the Saints) under 40 (average points allowed), and they didn’t play cupcakes.”

Light recorded 14 points for Northern Lebanon and Yeager registered ten. The Vikings were guilty of 12 turnovers in the first half.

“The Elco win was big for us, for the program,” said George. “We haven’t been in this spot in a long time. I think we can take some positives from this. I thought we got after them on the defensive end.”

Courtesy of a Yeager jumper and a Light trifecta, Northern Lebanon closed to within 34-22 with three minutes left in the third period. But the Saints answered with another 8-0 run and maintained all or parts of their 20-point lead during the entire fourth quarter.

“Tonight’s game was for states,” said George. “Something I don’t think has happened in school history for a long time. We missed an opportunity. But the best part is we have two more shots. If we can get that game (on Monday), we can get to the fifth-place game and see if we can get into states.”

To purchase images in this article email jkfalk2005, or to view more go to https://lebanonsportsbuzz.com/photo-gallery/. 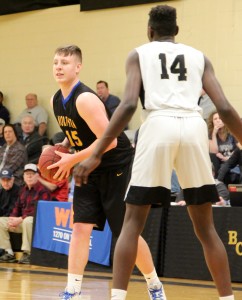