6 years ago
Masters of Themselves, Champions of County Legion Baseball

PALMYRA – If last year was about brute strength, raw talent and experience, then this year was about finesse, coming of age and performing at its best at the absolute right time.

Underdog on a roll.

On Wednesday night at Palmyra High School, Myerstown completed one of the most unlikely title defenses in the 85-year history of the Lebanon County American Legion Baseball League by edging Campbelltown 4-2, in the second championship contest – the ‘if necessary game’. Despite losing seven regulars – but with its heart and soul intact – Myerstown pulled off the rare championship repeat with a new cast of characters.

Appropriately enough, it was emotional leader Cody Horst who struck the decisive blow for M-town, a line-drive single to right-field in the top of the seventh inning that scored a pair of teammates and snapped a 2-2 tie. The pitching was handled ably by starter Austin Douple, who was named the double-elimination playoffs’ most valuable pitcher, and star Conor Bawiec, who closed out Campbelltown in the bottom of the seventh, one-two-three, after having been on the shelf the last ten days because of a weight-lifting accident.

After going 7-8 during the regular season, third-seeded Myerstown went 6-1 in the Lebanon County American Legion Baseball League’s double-elimination postseason tournament. In addition to a shiny trophy, Myerstown Baseball Inc. earned the right to represent Lebanon County at the eight-team, double-elimination Region Four tournament, which it will do beginning Saturday at 9:30 a.m. opposite Pleasureville.

Campbelltown, the second seed, completed its year at 12-7.

“Last year’s team was loaded on the field. They looked like a different team,” said Myerstown head coach Johnny Mentzer, whose club was making its third straight appearance in the league finals. “They were horses walking into the dugout. They were big, they were strong and they were 18. For us, it’s a different philosophy. We rely on defense and pitching more. But they smelled it when they got here.

“It’s awesome for the kids because of where they were in the playoffs,” Mentzer continued. “That’s (Campbelltown) a good team. Fredericksburg was a good team. Every team in this league is a good team. It has nothing to do with me. It’s all about the kids.”

“No, they didn’t want it more,” said Campbelltown head coach Tim Morgan. “We wanted to go. Who doesn’t want to go to regionals? It’s whoever shows up. It was meant to be this way. I don’t feel good about it. I think we’re the better team, but it doesn’t matter.

“We had our pitching lined up for Ephrata,” continued Morgan. “But we didn’t get there. In the fifth inning, I was licking my chops, and it turned sour. All year he (Mentzer) was losing one-run games.”

It was the top of Myerstown’s order that got the job done, with one out in the seventh.

Lead-off hitter Kyle Knight singled ahead of a walk to Douple. Kyle Bogdanovich, who was tabbed as the postseason’s most productive hitter, singled, before Horst drove an outside pitch to right-field, in front of Campbelltown outfielder Dylan Spagnolo.

“It was very appropriate that Cody got that hit,” said Mentzer. “Cody will tell you that he had a runner at the third base in the prior at-bat and didn’t get him in, and he was mad at himself. But I told him, ‘You’re going to get another chance’. Cody has been here three years. He’s a great kid, a great leader.

“I can’t see it happening to a better guy,” said Morgan. “Johnny is a good coach. He’s a great friend of mine.

“Their kids are showing up now,” Morgan added. “I’m glad to see Conor (Bawiec) back. But he’s taking a chance playing. He’s a good athlete and he’s a good sport.”

After having momentarily lost the momentum that had carried it through the playoffs, Myerstown regained it in the top of the fifth inning.

Down a couple of runs, it was K. Bogdanovich’s crucial two-run single that tied it. Andy Bogdanovich and Kyle Rosengrant set the table with one-out singles, and then Douple walked to load the bases.

“We lost the momentum, but we got it back,” said Mentzer. “He (K. Bogdanovich) got unlucky earlier in the game. He’s been hot the last few weeks. He and Brett (Bawiec) have been carrying us. Kyle was the right guy at the right spot.

“I know our guys wanted it,” added Mentzer. “I can’t talk for them (Campbelltown). We had Douple coming back on three days rest. Every single guy on our bench wanted it. That’s all I cared about.” 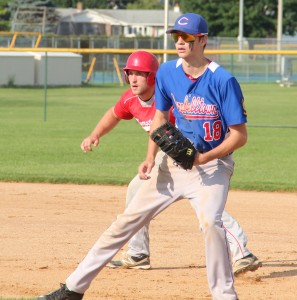 “He was in control until the sixth,” said Morgan of his starter, Zach Yingst. “But those walks kill you. And then you give up a hit to the bottom of the lineup. That was tough. We pitched out of trouble a couple of times. But eventually it’s going to bite you in the rear.

“Yingst threw a good game,” Morgan added. “I went out to talk to him (in the seventh) and he was at 90 pitches. I didn’t want to bring a kid in there who hadn’t pitched, with the bases loaded. The bottom of their order, with two outs and two strikes, that killed us.”

To get the win, Douple worked six innings of two-hit, four-strikeout, three-walk ball. He may have done his best work when he wiggled out of a two-on, nobody-out situation in the bottom of the sixth, caused by a walk and a couple of errors.

“I think so,” said Mentzer, when asked if Douple’s quick working on the mound affect the Campbelltown hitters. “They’re calling time between every pitch. But that’s what Doup does. He works fast and throws strikes. They (Campbelltown) barreled him up one inning. It’s more of being a shortstop than a pitcher. He wants to get the ball and go.

“But Doup threw great,” Mentzer continued. “What did he give up, three hits in six innings? He’s tired. I knew I had to make a change in the seventh. Conor still has safety issues for batting. But he texted me today and said he could close. He was cleared to throw one or two innings, but not to hit. They (Campbelltown) didn’t even sniff him.”

“Coming back on three days rest, that’s stepping up,” said Morgan of Douple. “If Doup didn’t pitch tonight, who do they have? He’s a very quick worker. In three seconds or less, he’s throwing the ball at you. I told my guys to step out on him. We played good. But there was no hitting.”

Campbelltown tagged Douple for a two-spot in the bottom of the third.

Brandon Charochak and Nick DeCarlo got things going with a walk and a bunt single, respectively, before being sacrificed to third and second by Isaac Blatt. Tyler Julian lofted a sacrifice fly to left for the game’s first run, and then Bobby Dorta plated DeCarlo for Campbelltown’s second run with a single.

“During the last week of the regular season we played well, and didn’t win,” said Mentzer, whose 2014 club bowed out of regionals in two games. “I knew once we got playing consistently we’d play well. We had to get into the groove of playing everyday. You could see it. We just needed to hit our stride. That last week of the season got us set up for this run in the playoffs.

“Our experience at regionals is going to help us a lot,” Mentzer continued. “We only have new faces in the starting lineup. It’s not going to be a new feeling. I shouldn’t be looking ahead, but I probably do. It’ll be a good experience for these guys. My job is to represent the county the best we can.”

“Well, yeah, we had a good season,” said Morgan, who is undecided as to whether he will coach Campbelltown next summer. “Twelve and seven. And this whole team is coming back. Everybody.”

To purchase images in this article email jkfalk2005@yahoo.com, or to see more go to www.http://lebanonsportsbuzz.com/gallery-nine/.

* Denotes regional champions
Note — The 1937 Lebanon squad was the only team from the county to win a state title. The 1981 Fredericksburg, the
1948 Myerstown and the 1938 Myerstown clubs were all state runners-up.