ANNVILLE – There’s nothing wrong with a little give and take.

On a changeable Friday evening, the Annville-Cleona softball team proved most opportunistic during an 11-6 home triumph over Lancaster Mennonite. After the visiting Blazers had knotted the score at three with two runs in the top of the sixth, the Little Dutchmen plated an astounding eight runs by taking/receiving/earning 23 ‘free’ bases in the bottom of the sixth.

The positive result lifted Annville-Cleona to 2-0 overall and 2-0 in Section Three of the Lancaster-Lebanon League, under rookie head coach Nicki Starry, the Little Dutchmen’s third head coach in three seasons. The contest served as both Lancaster Mennonite’s season and section opener.

“That was the great part,” said Starry of the Little Dutchmen’s winning rally. “I could see it on the girls’ faces. They weren’t nervous. They came right back. They were determined. Instead of getting down and not trusting each other, they fought back.

“The (Blazers’) pitcher was starting to get a little wild,” continued Starry. “The girls got more aggressive. They started taking bigger leads. Once the ball hit the ground, they started running. Then once we cleared the bases, you could see the relief.”

Though the Little Dutchmen had relinquished the momentum in the top of the sixth, they stole it right back in their half of the sixth.

“Our girls have continued to learn, every play, even the errors,” said Starry. “I love that they take responsibility and ownership. That’s the way I coach.

“I think we still have a lot of improvement to go,” Starry continued. “I’m hoping to get a few more games under our belts. I’ve got Kaila Grubb. I’ve got a pitcher on the mound. For us, once we learn the simple things, I think as they (her players) become accustomed to it, we’ll keep growing and growing.”

Annville-Cleona starter Katie Shaak cruised into the top of the sixth, protecting a 3-1 lead. But the Blazers touched Shaak for two runs – only one of which was earned – with two singles and an RBI-grounder.

Shaak went the distance to get the win, striking out five and walking one.

“I thought Katie had a great game,” said Starry of Shaak. “She came through. She put the ball on the ground. She put the ball in the air. She was a great teammate. She stayed in there. She wanted to take the game at the end.”

Already up 2-1, the Little Dutchmen extended their lead in the bottom of the fifth.

It began with a one-out single by Arianna Clay. It continued with a stolen base and a throwing error, and concluded with a wild pitch.

It was also an omen of things to come.

“It was a sloppy game,” said Starry. “But they (her players) kept pounding away. We just kept running. Sometimes when you can’t hit, you’ve got to make things happen. I feel like we’ve been cancelled left and right (because of the weather), and the kids have been rolling with it.

“I’m so impressed with how much support’s here,” Starry added. “They have a great support system and an amazing booster club. They make it so I can just coach.”

Annville-Cleona jumped out to a 2-0 lead in the bottom of the first.  Three-hole hitter Alyssa Ulrich knocked home Lauren Schrader, who had singled, and Shaak contributed an RBI-safety. 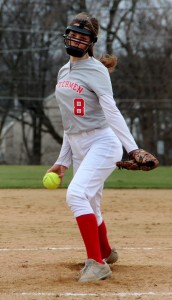 But the Blazer sliced their deficit in half in the top of the third, without the benefit of a hit.

“They’ve had some good years here,” said Starry. “I’d love to add to it. I truly believe if things keep going the way they are, we’ve got a chance to be good.

“Our junior class has been wonderful,” concluded Starry. “Our four captains are all juniors. If it weren’t for the juniors, we wouldn’t even have a team. About two or three weeks after I was hired, during the first month of work-outs, we had four or five kids. What’s we’re winning with, I’m happy.”