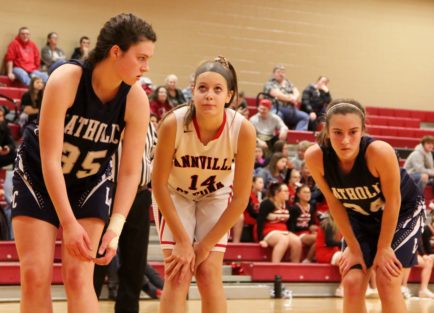 ANNVILLE – When Annville-Cleona peered across the court, it saw a girls’ basketball team that it thought it had a good chance of beating. The only problem was, the Lebanon Catholic squad looking back was thinking the exact same thing.

This concept of ‘winnable games’. Yeah, it’s a thing.

On Friday night at ‘The Barn’, it was the Little Dutchmen who displayed a little more urgency down the stretch – as well as a softer touch at the foul line -as they shaded the Beavers 46-39 in a tightly-contested Lancaster-Lebanon Section Five affair. With the outcome on the line during crunch time, Annville-Cleona was the obvious aggressor, but the Little Dutchmen also benefited from some cold Catholic shooting at the charity stripe.

With the result, Annville-Cleona improved to 4-7 under rookie head coach Lisa Shucker, and 1-4 in the section. Lebanon Catholic slipped to 5-6 on the season and 0-4 in the league.

“We thought it was a very winnable game,” said Shucker. “We prepare like we’re going to win every game. We think we can win seven of our next 11 games. I think we looked at this game differently because it was our rival.

“We felt this was a winnable game,” said Lebanon Catholic head coach Patti Hower. “We have some opponents coming up we don’t match up with. We need to win the games we should win. But I think we’re improving.

“I thought they (the Little Dutchmen) played hard,” Hower continued. “They made shots. They took it to the hoop. There’s definitely improvement there.”

The outcome was very much in doubt when Katie Davis scored on an inside move to pull Lebanon Catholic to within 33-32 of the lead, early in the final quarter. But over the next four minutes, Annville-Cleona outscored the Beavers 13-3 to open a 46-35 advantage, with 40 seconds remaining.

“At the end of the third quarter, I was getting anxious because we were settling for jump shots,” said Shucker. “Our game is pushing the ball up the floor, getting to the basket and getting to the foul line. We didn’t settle for just running clock. We told them (her players), “Run the play. We’ve got to score.’ With three minutes left, I was feeling pretty confident.”

“This team has to learn how to win,” said Hower. “There were some end-of-game situations we didn’t execute.

“I knew it was going to an even match,” added Hower. “We both struggle in some areas. But they made foul shots and we didn’t.”

The Little Dutchmen led throughout the third quarter, but never by a lot. Back-to-back buckets from L. Schrader and Katie Shaak in the middle of the period made it 28-23 A-C, and an old-fashioned three-point play by Brightbill gave the Ltitle Dutchmen a 31-26 lead.

“For our kids, we only may be 4-7, but this win means a lot,” said Shucker. “Some of these girls never beat Lebanon Catholic. We’re on track. They (her players) haven’t given up. It was probably our most complete game of the season.

“They (the Little Dutchmen) hit some shots, and they were from people who we didn’t expect,” said Hower. “It’s a credit to them. Where we struggle is offensively, and we find it hard to come back. But I was proud of them (her players).”

Nye led all scorers with a career-high 13 points. Avery Hupp tallied 11 points for the Beavers.

“I keep telling her, ‘You’re a scorer. You’re athletic,'” said Shucker of Nye. “Finally, she broke through. She’s only a sophomore. She is going to be a good basketball player. But we’re trying to build everyone’s confidence.”

“It’s a different year. It’s a different team,” continued Hower. “They’re (her players) all new. I’ve had to teach a lot, and I’m beat. I’m a little surprised by what we don’t know. They really don’t know the game. They have to watch more.”

Down 3-2 early, it was a pair of Nye free throws and a three-pointer that sparked Annville-Cleona’s 13-3 run that gave it a 15-6 lead. Also included in the burst were four more points from Nye, a Shaak stick-back and a driving lay-up by Ulrich.

“We’ve had a couple of slow starts,” said Shucker. “But all the games we’ve won, we’ve had fast starts.”

The Beavers opened the second stanza on a 12-3 spurt – courtesy of five points from MacKenna Purcell, four Hupp points, a deuce by Alyssa Lower and a Sami Hatzfeld foul shot – to knot the score at 19. But Annville-Cleona closed on the half with a 5-2 run that featured a three-pointer from Arianna Clay and a Drane bucket.

“I think it’s going really well,” said Shucker. “If you look at wins, it’s not going well. But we’ve done a lot of building the program. I have such supportive parents. Anything we suggest for the kids, it’s happening. I couldn’t be prouder of how they’re (her players) playing right now.”

“It’s a challenge, because we have to do things to make them better,” said Hower of her troops. “It’s simple things like, how many passes we don’t catch. We haven’t improved as much as I would’ve liked. I don’t want to be negative. But we haven’t progressed as fast as I would’ve liked.”