Grace is a difficult concept to wrap one’s understanding around, and it’s even harder to identify.

Grace is an approach to life, a connection with God, a certain way that one of us moves around among the rest of us. Grace is based in respect, self-confidence and caring, and sprinkled with liberal amounts of wisdom, charm and beauty.

The gift of grace is rare. Not everyone has it. But Jamie Gray does.

The seeds of Gray’s grace were instilled in her at an early age, nurtured, and have served her well through her retirement this week. It will be the tool she will fall back on most, as she puts an outstanding international shooting career behind her.

“I am a private person,” said Gray, by phone from her new home in Montana on Friday. “I had the experience of coming home without a (Olympic) medal, and the experience of coming home with a (Olympic) medal. They were two totally different experiences. When you come home with a medal, everyone wants some time with you. I embraced that with the sport I represent. I had an opportunity to bring guns and shooting into a perspective I wouldn’t have otherwise been able to do. That’s why I embraced that opportunity.

“I don’t know if you can ever prepare for this,” Gray continued. “But I’ve been lucky to have the support of my family. I talked about retiring, and everyone was on board with it. You don’t know what to expect when it comes. The one thing I know is that something I’ve done for so long isn’t there any more.”

Gray, a graduate of Cedar Crest, retired a month before her 30th birthday, from 21 years of competitive shooting, most of which came on the international level. Gray is the only Lebanon County native to ever win an Olympic medal, striking gold at the 2012 Summer Olympic games in London in the women’s 50-meter rifle three-position shooting event.

Gray was forced to retire by the deteriorating health of her back, brought on by the grind of international competition and training.

“After I talked to my coach and some other people, I made the decision,” said Gray, the former Jamie Beyerle. “It’s something I’ve been thinking about, something that’s been weighing on my mind. I think any decision like that is quite difficult, when you’ve done anything like that for that long.

“I’ve been battling the injury since August of 2010, with injections and therapy,” continued Gray. “I had three injections to get me through the London games. I took a year break and nothing changed. The pain came back again.”

“It’s just an over-use injury,” added Gray. “We get into this horrible position for the back. And I was doing it for about two hours a day. It’s just not good on the body. For me, I know what it takes to win, what it takes to be the best I can be. I can’t just be competitive. It’s not worth it to me.”

Not only did Gray garner the gold in London in 2012, she also set a new Olympic record in the three-position in the process – that she accomplished it while in some degree of pain is even more remarkable. She also brought home fifth-place from the women’s 10-meter air rifle competition.

“What I remember is the whole journey, all the things that take to get you there,” said Gray. “There’s so many people who helped you get there. I had been so close (at Beijing in 2008), so it was awesome when you have that one match where everything came together. Everything went right.

“The health of your back is very important,” Gray added. “I wouldn’t be able to be successful at The Games without injections. It’s simply not possible. My body rejects the standing position.”

Still riding the emotional high of her greatest accomplishment, months later Gray vowed to defend her gold medal at the 2016 Summer Olympics in Rio De Janiero. And while no longer physically able to do so, Gray still seems to possess the drive for producing the mental energy required to get there.

“I think the injections weighed on me quite a bit before the games,” said Gray. “I had to be conscious of what I did and I how I did it. After London I thought, ‘This is awesome. I want to do it again.’ Any time you do something like that you want to defend your medal. But I took a year off, and it didn’t help.”

At the age of 29, Gray isn’t really retiring, not in the traditional sense. Her approach is that she’s moving on to the next phase of her life. 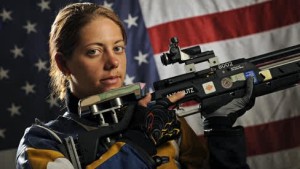 “I think I’ll put my feet up and try to figure out who ‘Jamie, The Non-Shooter’ is,” said Gray. “For 20 years, I’ve been ‘Jamie, The Shooter’. There’s a lot of options out there. I’m a huge proponent of giving back to the sport.

“It’s hard to say what you want to do when your dream has already come true,” Gray continued. “I’d like to stay in the industry. I also have some plans to do some coaching. But I’m not ready to take on anything like being a national coach now. Hopefully, that’ll (coaching) be possible.”

But just because Gray’s dream came true in the initial phase of her life, doesn’t mean she doesn’t have goals and aspirations for her next phase. An Olympic gold medal doesn’t satisfy you, it makes you want more.

“You need to be at peace with your last accomplishment,” said Gray. “Every failure I learned from, and it got me on the top of the podium in 2012. The one thing I missed out on in my career was a world championship, but I’ve got other things to show for it.

“It’s difficult to come to the end of that part of your life,” Gray continued. “But it’s exciting to see what’s next. All I can do is embrace the next chapter.”