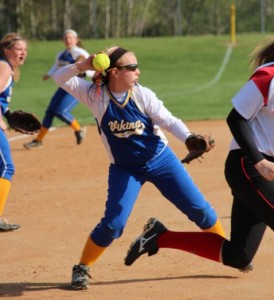 FREDERICKSBURG – Not only can scholastic sports provide us with one, but they can also teach us about direction.

The Annville-Cleona softball team has discovered its way and purpose. Northern Lebanon, on the other hand, hasn’t lost its, because the Vikings never really found it.

On Monday afternoon at Northern Lebanon High School, two teams headed in different directions met on the diamond, with fairly predictable results. Behind junior pitcher Chrisi Lerchen, the Little Dutchmen played solid, fundamental softball all the way around and defeated the Vikings 7-1, in a Lancaster-Lebanon Section Three-Four crossover tilt.

The win has the Little Dutchmen, now 8-4 overall and 7-3 in the league, very much in the middle of the Lancaster-Lebanon Section Four race and thinking playoffs. The Vikings, now 2-11 on the season and 1-9 in Section Three, are trying to figure out what went wrong, and whether or not there’s still time left to fix it.

“There was a Lancaster Catholic game over there that we should’ve won,” said Annville-Cleona head coach Dave Bentz. “Other than that we’ve got what we deserved this season. We’re not a team that gives up runs and comes back. It’s hard for us to play from behind.

“I think one’s starting to raise her hand, and that’s (junior catcher) Haley Hirn,” Bentz continued. “But how do you learn how to be a leader? It’s not something they teach you in class. You either have to be born with it or learn it yourself. I still think the leader on the team is the guy who stands at third base. I don’t want to be, but they (his players) know it’s going to happen. Today it seemed to work for us. We lived to play another day.”

“The expectation was that as the season rolled along, we’d show more improvement as a team,” said Andy Bender, one of Northern Lebanon’s co-coaches. “To have everybody moving in the right direction. That’s been the disappointment. We’re still a work-in-progress.

“At the beginning of the season, I was thinking between eight or ten wins,” added Bender. “That’s what I was eyeing, once we got our parts together. We still have some winnable games coming up. We’ve just got to keep working hard.”

Down a run, Annville-Cleona got that one back and two others in the top of the third inning. The key to the rally was the Vikings committing an error on a sacrifice bunt.

So with two runners aboard, Hirn ripped a triple to put the Little Dutchmen ahead for good. Emma Lerchen followed with a single that plated Hirn.

The Little Dutchmen were at it again in the fourth, this time scoring a run after having the bases empty and two away. Singles from C. Lerchen and Crystal Miller put pressure on the Viking defense, which then yielded an error and the subsequent run that made it 4-1.

“I thought it was a basic game,” said Bentz. “We knocked in runs. We manufactured runs. We played a nice game. Chrisi pitched well. We hit, we pitched and we fielded. If you do all three, you’re going to be a winner.

“(Northern Lebanon starter, Emily) Marko doesn’t throw hard or fast,” Bentz continued. “But she’s a nibbler, she’s going to hit corners and get you off-balance. But once we got a couple of runs against her, we did fine.”

“What I see from them (the Little Dutchmen) is that they’re disciplined,” said Bender. “I think they work well as a unit. I didn’t see any dysfunction. Everybody was doing their job. Give them credit. They played a solid game.

“I think hitting-wise, we didn’t do any timely hitting,” added Bender. “We’re just not stringing them together. We’ve been getting our hits, but just not matching them up.”

The Vikings got to C. Lerchen a little bit in the bottom of the second. Molly Mount walked, was sacrificed to second by Julie Brandt and scored on Erica Dulac’s RBI-single.

C. Lerchen worked out of a first-and-third-with-one-out situation in the fourth and a bases-loaded-two-out predicament in the seventh. C.L. surrendered six hits, struck out seven and walked four.

“I thought she threw very well,” said Bentz of his ace. “I thought he (the umpire) kind of pinched her quite a bit. They (the Vikings) only hit about three balls hard. Other than that, she pitched well.  She kept it on the ground, and we made the plays. We did play well defensively, without a doubt. I’m very happy with the way we played defensively.

“It’s an intra-county game,” Bentz added. “You want to win intra-county games. But just because their (the Vikings’) record isn’t great doesn’t mean they don’t battle. They’re not going to give it to you. We’ve made the rounds. We’ve played every Lebanon County team except Cedar Crest and Lebanon. Those are the games you’ve got to win.”

“I thought she threw decent,” said Bender of Lerchen. “She threw strikes when she needed to. And her defense made plays at important times.

“What we’re trying to get all the girls to do is be aggressive,” continued Bender. “When we have runners on base, we’re not aggressive enough. And other times we’re not disciplined. It’s like we’re jumping at pitches.”

The Little Dutchmen upped their lead to 5-1 in the sixth when Mindy Reigle singled, stole second, moved to third on a grounder and then came home on C. Lerchen’s RBI-ground out. Annville-Cleona got its first two runners on in the seventh, and both scored, thanks to RBIs from Christy Snyder and pinch-hitter Hannah Fischer.

“Early in the season, we had a lot of errors,” said Bentz. “In one stretch, we had 24 errors in four games. I think they (his players) were trying to throw before they fielded it. I think they’re finally settling in. But we’re still going to have boo-boos.

“If we keep winning, we’re going to be in districts,” Bentz continued. “The last two years we didn’t win the section. But last year we got second in districts and went to states. I don’t put too much emphasis on leagues (the Lancaster-Lebanon postseason). In districts you can look everyone in the eyes and say, ‘We’re the same size as you.'”

“She didn’t throw badly,” said Bender of Marko. “A couple of spots, I thought we should’ve played a little better defensively. We’re riding her. She’ll keep us in games until we get our bats turned around.”