6 years ago
Cedar Crest Ends Season with an Identity Crisis

SOUTH LEBANON – It’s difficult to get the most out of a team – for it to reach its full potential – when you’re never quite sure what you’re going to get. The only consistent thing about Cedar Crest’s 2016-17 boys’ basketball campaign was its inconsistency.

On Tuesday night at ‘The Cage’, the Falcons’ mostly successful season came to a disappointing end, with an uneven 64-48 home loss to Central York, in the opening round of the inaugural District Three Class AAAAAA playoffs.  Cedar Crest’s poor decision making resulted in 22 turnovers, and the Falcons yielded a season-high ten three-point field goals.

Cedar Crest started well and led 13-5 after eight minutes of play. But Central York outscored the Falcons 59-35 over the final three periods.

The loss ended eighth-seeded Cedar Crest’s year at 15-8, but there were plenty of positives along the way. The Falcons, who just missed out on making the Lancaster-Lebanon League playoffs, were making their fifth straight appearance in the District Three tournament.

Ninth-seeded Central York improved to 18-8 on the season, and moved into Friday’s Class AAAAAA quarterfinals against top-seeded Reading.

“It’s frustrating because I don’t think they (his players) understand how good they are,” added Smith. “When we were consistent, we played very well.”

Coming off a two-week lay-off, the Falcons played their best basketball of the evening in the opening quarter.

Protecting a 6-5 edge, Cedar Crest tallied the final seven points of the first period. The Falcons sandwiched a Blake Thomson drive around a three-pointer from Cole Laney and an inside move by Laney.

But the Falcons surrendered 22-second-period points.

“It was tough,” said Smith. “I thought we did a nice job in the first quarter of contesting shots. But from the second quarter into the second half, they (Central York) got open shots and knocked them down. But my kids battled, start to finish.

“I knew we had a few unforced errors,” continued Smith. “But you can’t turn the ball over 22 times against a team like that and expect to win.”

A floater from Dylan Miller gave Crest a 15-7 advantage early in the second stanza, and Laney drained another triple two minutes later to put the home team up 18-14. But with Central York feasting on Falcon turnovers, the visitors outscored Cedar Crest 13-3 before the break, to take a 27-21 margin to the locker room.

“We wanted to compete,” said Smith. “We hadn’t played in a couple of weeks. We wanted to play a game. Extending our season was the goal. But you’ve got to be better than one team on one night, and we weren’t better than Central York tonight.

“I think they (his players) need to understand the importance of every possession,” Smith continued. “When you turn the ball over 22 times, I’m not sure you understand that. I want them to have a sense of urgency on both ends of the floor.”

Thanks to four deuces, a trio of three-pointers and five-for-six free throwing, Laney’s total of 22 points led all scorers. But no other Cedar Crest scorer reached double figures.

The Falcons were outscored 30-9 from beyond the arc.

“It’s a special accomplishment,” said Smith of his program’s string of five straight district appearances. “When I took over, I don’t know how many playoff appearances we had. It’s an expectation of our program now. But we want to compete for championships.”

When Jaiden Melendez scored on a driving lay-up with 1:58 left in the third quarter Cedar Crest was very much within striking distance, down just 35-34. Melendez’s bucket capped a 6-0 Cedar Crest run that also included a deuce from Miller and a steal and lay-in by Tate Seyfert.

But Central York concluded the third stanza on an 8-2 burst, and with a 43-36 advantage.

“I thanked them, for everything they did for the school, for the basketball program, for me,” said Smith of the post-game address to his troops. “I told the underclassmen to stay hungry. I told them to let it drive them. To be humble and hungry. To do whatever it takes. No one liked it (the outcome).”

Central York notched seven of the fourth-quarter’s first eight points to extend its lead to 50-37.

“I didn’t give it too much thought, besides thinking we were one of the smaller schools in 6-A,” said Smith of District Three’s new six-classification format. “We were playing some of the same schools we did in quad-A.” 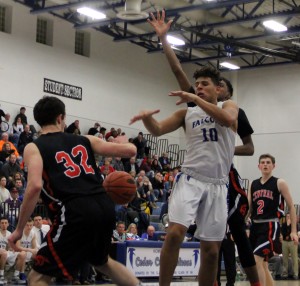