8 years ago
Through Debris, One Can Still Feel Fredericksburg Memories 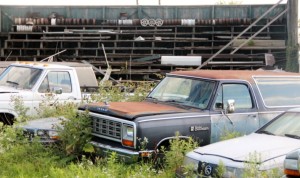 To the untrained eye – or to those who have no memory of the great events which once took place there – it’s a junkyard, a salvage lot. But Dale E. Richard, Jr. can still hear the motors sing, can still smell the scent of freshly-cut grass, can still see the wide-eyed visitors strolling through the gate.

For all 54 years of his existence, Richard’s family has owned the ten acres of land on the eastern most part of Fredericksburg proper, where Main Street comes to a point with Route 22. Now it’s a convenience store, a car wash and a garage. But at one time, it was one of the most popular sports venues in all of Lebanon County.

“It’s a salvage yard,” said Richard. “But I remember the racing. The racing from the racing days. My memories of this place are very strong.

“The future is just doing what I do now – trying to make a living,” Richard continued. “It’s not worth selling to me. This is all I’ve done all my life. This is what I do. What the hell would I become without it?”

From the outside, if one looks very closely, he or she can still discern the cinder-block walls that helped house, first Fredericksburg or Grimes Stadium, and later Fredericksburg Speedway.

Initially a baseball diamond, Grimes Stadium was built in 1947 and was home to Coble Grimes’ famed College Hill Chix, a Class A minor league team. While the Chix were made up of mostly local players, some went on to play in the major leagues. And fans would come from all over to see them play in Fredericksburg.

At one point, the stadium was owned by Fredericksburg High School, which conducted scholastic baseball games and graduations there. Richard’s father Dale Richard, Sr., bought the stadium and the surrounding land in 1965.

“I’ve got people stopping quite a bit, people who went to the races, people who like baseball,” said Richard. “But when the younger people drive by, they have no idea what it was. I’d bet money on that.

“Oh, I don’t know if it’s a Fredericksburg landmark,” continued Richard. “I guess you could say that. I’m sure there’s more historic places around here that you could find.”

In the late 1960s, Dale Richard, Sr. knocked out the outfield wall, constructed a quarter-mile clay track and Fredericksburg Speedway was born. He promoted racing there until 1974 – automobiles on Friday nights and motorcycles on Saturday nights. The last year for racing was 1976.

“He just wanted to make a go of a race track,” said Richard of his father, who passed way in 2010. “He was in the automotive business. He knew about racing. He didn’t know about baseball.

An adolescent at the time his father owned Fredericksburg Speedway, Richard helped out before, during and after races, in any way he could, mostly as a runner or a ‘go-for’.

“Yeah, oh yeah,” said Richard. “We were always working. We weren’t taking pictures. It used to be a fun time. That was the late 60s and early 70s. We were either working in the refreshment stand or running papers up to the race officials. There was a lot to do.

“Back then, racing wasn’t what it is now,” added Richard. “People weren’t attracted to racing the way they are now.”

In many ways, Richard is working the property the same way his father did 50 years ago. But of course there are noticeable changes brought about by time.

“He was the one who built it,” said Richard of his father. “I’m just trying to keep the legacy going. I think my father would love this. He did a lot for this town. Some don’t appreciate it as much as others.

“I enjoy history,” Richard added. “I read about it. I watch it on TV. That’s why I’m going to stick it out as long as I can.”

Some would consider ten acres of land situated along a well-traveled highway to be prime real estate. Though Richard would not divulge the value at which the land has been assessed, it might be worth more than one thinks.