LANDISVILLE – The Cedar Crest boys have been a good basketball team for about a month now. But exactly when did the Falcons become mentally tough, battle-tested and uber-focused?

For those are the characteristics of a very good team.

On Wednesday night at Hempfield, in the semifinals of the Lancaster-Lebanon League playoffs, the Falcons drew upon their new-found grit and resiliency, and it served them well, during an electrifying 78-72 double-overtime victory over Elizabethtown. After regulation ended in a 66-all draw and the initial extra session concluded with a 72-72 deadlock, the Falcons held the foul-plagued Bears scoreless during the second four-minute overtime.

Buoyed by a career-high 27 points from freshman Evan Horn, the Falcons simply out-gutted E-town during gut-check time. Horn netted eight of Cedar Crest’s 13 post-regulation points, including a strong ‘take’ to the basket 39 seconds into the second OT that proved to be decisive.

The triumph was the Falcons’ 11th in their last 12 outings, and moved them to 16-8 overall and into Friday’s 7 p.m. Lancaster-Lebanon League championship game at Manheim Township, opposite McCaskey. The Red Tornado, which dispatched previously unbeaten Donegal 72-65 in the other semi, are responsible for Crest’s lone loss over the last month.

Elizabethtown, the Section Two champs, dipped to 17-7 overall. Back on Dec. 14 in South Lebanon, the Bears nudged the Falcons 62-56 in a Section One-Two crossover affair.

“You wouldn’t know this group hasn’t been to the playoffs in 30 years,” Smith added. “This is a gutsy group. Our two seniors (Killian Klopp and Clay Penchard) are great leaders, and they bring out the best in everyone else. This team is mentally strong.”

“It was fun,” said Penchard. “It was really back and forth. We just couldn’t get too high or get too low. But defense really decided the game.

“I’d say defensively, we were really focused,” added Penchard. “We made it hard for (E-town’s Tyler) Koser to get the ball, and (Lucas) Jewell had already fouled out. We stayed together as a team. And we just kept playing and playing and playing.”

Horn had given Crest a 70-68 advantage with 1:19 left in the first overtime, and two charity tosses from Penchard 36 ticks later made it a 72-69 game. But Jewell drained a long three-pointer from the right wing with 17 seconds left to send the contest to another overtime.

In the second extra session, a free throw by Horn with 1:34 remaining gave the Falcons a 75-72 margin, and when Penchard knocked down another one, it turned it into a two-possession game. A technical foul whistled on Elizabethtown 24 seconds later sealed its fate.

“I thought we had a chance at this looking, at the league,” said Smith. “What were my goals and expectations for the season? I told you from the beginning that it was to compete for a Section One title. Did I expect to be here? I don’t know if I expected to be here, but I hoped we would.”

Cedar Crest missed out on a golden opportunity to close the game out in regulation. But to their credit, once the opportunity was gone, the Falcons kept searching for another.

Klopp had put Cedar Crest up 66-62 with a pair of foul shots with 50 seconds to go. And the Falcons were clinging to a two-point edge when they came up with a turnover with 20 seconds left, and threw the ball ahead to 6-6 center Andrew Eudy.

With an uncontested look at the basket, instead of laying the ball up, Eudy chose to attempt a dunk. But Eudy misfired on the slam, and three seconds later, E-town knocked down a couple of free throws that sent the contest to ‘bonus basketball.’

“We tell them (his players) to dunk in practice,” said Smith. “He (Eudy) makes that shot nine out of ten times. He did what he’s coached to do.

“We wanted to finish it there,” said Penchard, “but we had to let it go. If we would’ve let it get to us, we wouldn’t be in this spot.”

Horn, who went scoreless in the Falcons’ quarterfinal victory over Lancaster Catholic on Monday, did the majority of his scoring damage on drives to the basket and offensive rebounds. Penchard supported him with 18 points, Klopp dropped in 15 and Eudy tallied 11.

Elizabethtown knocked down a total of ten three-point baskets.

“Evan is a difference-maker on both sides of the court,” said Smith. “He’s a tough check and he can guard anyone. The kid is a freshman only by grade. He lets the game come to him. I don’t need to put any more pressure on him. He has enough on him.

“He’s (Horn) worked out with us all summer,” added Smith. “The kids knew him. He had surgery right after football season, but it didn’t take long for him to get back on the court. He worked his way onto the floor.”

“He’s just ridiculously athletic,” said Penchard of Horn. “He’s 14, but he plays like he’s 20. He’s a man-child. His defense is key because he always guards the other team’s best player. And he’s very composed.

“It didn’t take long at all for him to become part of the team,” Penchard added. “At the beginning of the season he had surgery and he didn’t play with us. Then we saw how he played and how aggressive he is. But he definitely did grow with his decision making.”

Playing patiently, unselfishly and getting good looks, Cedar Crest played some of its best offense of the season in the first quarter. Cedar Crest ended the period on a 15-3 burst, and took a 24-11 lead on a drive by Horn at the buzzer.

But Elizabethtown outscored Cedar Crest 23-14 in the third quarter, then took a 52-51 edge 13 seconds into the final period.

“We got what we wanted,” said Smith. “We ran our offense to a tee. We didn’t do anything special. We executed. And when you’re scoring you can set your defense.

“But I told our guys, ‘Keep your heads’,” continued Smith. ” ‘They’re (the Bears) a good basketball team. They’re going to make a run.’ And they did. But we responded. I just have a tough group of kids.”

“It felt amazing,” said Penchard. “It felt unbelievable, coming out and playing great defense and great offense. But that’s what Coach was saying, ‘control your highs.’ But once they (the Bears) made their push, we kept playing.”

The Falcons recorded 5-17 records in each of the past two seasons.

“Last year we said that too,” said Penchard of his team’s preseason goal of qualifying for the playoffs. “But this year we were really confident. We were playing like this all summer. But we weren’t playing like this at the beginning of the season.

“We figured to be in this situation,” continued Penchard. “With McCaskey, it’s hard to beat a team three times in one season. They’re a good team, but they’re beatable.”

David may need two stones for his slingshot. 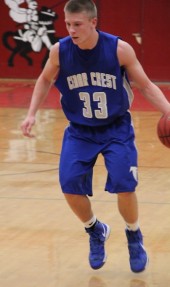