8 years ago
Defending Champ Campbelltown Hasn’t Been Dethroned Yet

PALMYRA – The defending champions having to beat last year’s last-place team just to get into the playoffs.

Irony? No, it was a telling and accurate microcosm of a unique regular season.

On Tuesday night at Palmyra High School, Campbelltown defeated Richland 4-1 in a special one-game playoff to decide the fourth and final berth into the Lebanon County American Legion baseball league’s postseason. The contest was shortened to five full innings by a violent thunderstorm that blew in at 7:08 p.m..

The special playoff was necessitated when both Campbelltown and Richland ended the regular season with identical 5-10 marks – and despite the fact that Campbelltown had taken two of its three meetings with Richland. On Monday, Campbelltown had edged Richland 4-3 in both teams’ regular-season finales.

With the triumph, Campbelltown, now 6-10, will meet regular-season champion and 13-2 Myerstown in the semifinals of the summer circuit’s playoffs. The best-of-three set will commence Wednesday at 5:45 p.m. at the Myerstown Legion field.

The other semifinal series will pit runner-up Annville against third-place finisher Fredericksburg. That series will get underway on Wednesday at 5;45 p.m. at Annville-Cleona High School.

“It’s a heck of a way to win,” said Campbelltown skipper Tim Morgan. “It was tough for my boys, thinking they already had the playoff spot locked up. But it worked out. Zach Yiengst threw a good game. He pitched half of a JV game for Palmyra (High School) this spring. I said, ‘What the heck, I’m out of pitching!’

“We’ve been playing good baseball the last couple of games,” Morgan continued. “Dumb errors, that’s been our problem all year. I thought with our record that we really didn’t have a chance to get into the playoffs. But when I looked at the standings there were three other teams in the same situation. We’ve been playing good at the right time. We’re starting to play baseball.”

“We easily could have made more improvements,” said Richland head coach Travis Thome of his team’s turnaround. “We went through the season with two pitchers. If we win (Monday) against Campbelltown, we’re in third place. I’m absolutely disappointed. But with what we had, the players need to pat themselves on the back for what they did do. We have guys who want to play the game of baseball. The season was good. I’m not satisfied with the way it turned out. But as long as we keep going in the right direction, that’s the most important thing.

“Going over it with Lyle (Krall), a lot of different scenarios could’ve played out,” added Thome. “My only concern was: we take care of business and we’re in the playoffs. It’s a relatively new by-law, but it’s an extra game for the guys. It’s not the outcome we would’ve liked. But playing past the regular season, I think it’s good for Richland legion moving forward.”

With the score deadlocked at one, Campbelltown scored what would prove to be the decisive run in the bottom of the third. Michael Arndt started it with a walk, was doubled to third by Griffin Mitchell and scored on John Binner’s RBI-grounder.

It was C-town’s only earned run of the evening.

Then in the fifth, C-town extended its lead against Richland starter Jack Mays to 4-1, thanks in part to two errors. With a walk, Mitchell was again in the middle of things, while teammate Bobby Dorta picked up an RBI and also swpied home on the back end of a double steal.

“That was the situation that broke it open,” said Morgan. “We were hitting the ball hard, but so were they. I don’t want to run into outs. Throwing the ball around certainly helped us a lot. When you get opportunities, you’ve got to cash in. I thought Richland fielded a really good team this year.

“I called (League president Bob) Fourman on the way to the field today,” Morgan added. “I wanted to get this (whether or not the game would be official after five innings) straightened out. I asked him, ‘What’s the deal?’ I didn’t want to go through that again.”

“We’re not an offensive powerhouse,” said Thome. “We know going to the field that we’ve got to hold the other team. We’ve got to make the routine plays. We did throw the ball around a little bit. You can’t do that against a good team. That’s (six errors) tough to swallow. If we don’t throw the ball around, would it be a different outcome? Who knows? We only scored one  run.

“You hate to say we lost the game because we didn’t even play seven innings,” Thome continued. “We would’ve had the top of our lineup up in the seventh inning, after seeing him (Yiengst) two or three times. In the end, rules are rules. That’s why they’re in place. Unfortunately, that’s the way it turned out.”

Working in and then out of trouble, Yiengst retired Richland in order only once, in the top of the second. The young righty left the bases loaded in the first, stranded a total of eight Richland runners in his five innings of work, struck out five, walked one and was aided by two double plays.

“The thing with him is that he throws hard and keeps the ball down,” said Morgan of Yiengst. “He threw that breaking ball four or five times and hit some batters with it. He was spotting the ball good tonight. He got into some trouble, but he got out of it. He has a different personality. He’s been primarily a catcher growing up, but the kid can throw. Richland’s got a good group, and we’re short on pitching.

“Right now, I’m playing with nine kids,” Morgan continued. “I’m sure the kids who aren’t showing up didn’t expect us to get into the playoffs. But the guys who are here want to be here. A lot of my top guys are here, but it’s like a cancer. You’ve got to deal with what you’ve got.” 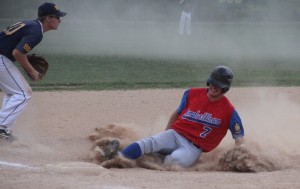 “He threw well,” said Thome of Yiengst. “He held us to one run. It was the story of our season. We had many chances and we just didn’t come up with the key hit. He threw a heck of a game. He threw well.”

Campbelltown raced out to a 1-0 lead in the bottom of the second inning. Anthony ‘Ant’ Faiola reached on an error, moved up on a single from Bryce Betz and came around to score on a pair of Richland throwing errors.

Richland responded in its next at-bat, after Phil Kline led off with a single. With the bases loaded, and on a comebacker to the mound, Yiengst hesitated bringing the ball home, and the indecision allowed the fleet Kline to score.

“Nobody ever heard of this,” said Morgan. “Everybody was talking head-to-head (as being the tiebreaker to get into the playoffs). It was tough to show up today after we thought we won it.

“We’re not going to lay down for them (Myerstown),” added Morgan. “We’re going to show up. I’ve got a little bit of a (pitching) variety, but it’s called a short leash. At this point, you can’t dig a deep hole. They are beatable. It’s not like the 25-2 teams I used to have or Fredericksburg had. I think we have a chance in the next round. You’ve got to play the game. You never know what’s going to happen.”

“For pretty much throwing 90 percent fastballs, at 75-80 percent, he did good,” said Thome of Mays. “Jack came up to Lyle before the game and said he wanted the baseball. Jack came out and pitched his heart out. That was the first time he was extended. He’s a gamer. He wants to compete. He looked good.

“They’re (Campbelltown) a solid ball club,” Thome added. “The top of their lineup is threatening. They can hit the baseball. They’re a team that has the firepower to score runs. That’s what they’re going to have to do in the playoffs. They don’t make a lot of mistakes. It’s going to be tough. But once you get into the playoffs, any given team can win. That’s why I would’ve liked to gotten in.”