6 years ago
Death of a Golf Course?

FREEPORT MILLS – Edward Schock can see life where there is now death.

That doesn’t make him a medium. It makes him a visionary, an optimist, an idealist.

Not unlike his father before him, Schock is the driving force behind Freeport Mills Golf Course still having a pulse. He is the link between Freeport Mills’ glorious past and its uncertain future.

When Schock speaks of the 30 acres of land in Bethel Township that has been in his family for 50 years, he speaks of it in the present tense, not the past.

“It doesn’t look bad, as far as the grass is concerned.” said Schock, during an informal walking tour of the course. “It wouldn’t take much mowing to bring it back to where it was. There is no distinction between the fairways and the rough. The big expense would be the greens. Bent grass seed, you’re talking over $10 per pound.

“Yes, it certainly could be used as a golf course again,” added Schock. “It would have to be someone who could see the potential, but doesn’t see all the work. Once the trees are off, it’s going to take mowing. The greens are going to take work. But we can bring it back on less of a budget.”

Schock’s father, Jim, owned Freeport Mills from 1967 until he passed away in May of 2014. The course was open for the 2015 season, but did not open this season.

There are a number of factors affecting Freeport Mills’ future, none of which are more pressing than the fact that the elder Mr. Schock willed the golf course to Edward and his two siblings. 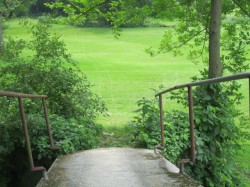 “It depends,” said Schock. “If we can get certain things, we could sell off part of it. There’s just a question of three children dividing it up. My brother and I would like to maximize the value, which includes taking the trees. If it was up to me, I’d still run it as a golf course. Things are so cyclical. It could come back, essentially in the same foot print.

“I can’t say definitely (about the course’s future), no,” Schock added. “There are a few things which could happen which would make it easy. And no, you can’t see anything for lots. It floods.”

With a number of factors working against it, Freeport Mills opening again seems like a long shot. One of the biggest reasons is that people just don’t seem to be playing as much golf as they once did.

“Golf became a different game,” said Schock. “Everyone expects to ride, wherever they go. We couldn’t get approval for carts because of the bridges. Why did Monroe Valley go the way it did?

“I don’t know,” continue Schock. “Remember the (fast-pitch) softball craze. My father thought it was affecting play. I don’t think people get away from their phones and computers, and into the open air. There is somewhat of a golf industry issue. We have to do something with the property. Cutting trees is one way of creating income. If you had come here in March, you would’ve seen more.”

At one time or another, the locale was home to as many as ten golf courses. It may be that it became too many for  such a small county like Lebanon to sustain.

“It did have character,” said Schock. “It was history. It is sustainable. The only thing we watered was the greens, but you can see what happens when you don’t water. Certainly people have memories of it. We still have people coming here saying, ‘We played here years and years ago.’ They have their stories. They have their experiences.

“It was busiest in the (19)90s,” Schock continued. “But I can’t really attribute the popularity to any one thing. There was more play then. But it was always the poor step-child in the county because it was only nine holes. It was short, and you were limited to where you could put the holes.”

“It is definitely one of the oldest courses and some of the people from the country club were involved in building it,” said Schock. “The property was bought primarily for the mill and the dam. The owner turned it into a concrete dam and he put his daughter in charge. And her boyfriend said, ‘Wouldn’t it be nice to build a golf course?’. So they did. Initially it was open only to people they knew, but eventually it was opened to the public. This was apparently a big tobacco area.

“My dad bought it in 1967 from Steven Becker,” added Schock. “Becker had been renting it to Dave Boyer. And Dave Boyer built his own golf course, Pine Meadows.”

It may be that Schock isn’t quite as  emotionally attached to Freeport Mills as his father. But it is he who is helping keep his dad’s dream alive.

“It was his,” said Schock. “He developed it his way. I don’t have the emotional attachment. I’d be more concerned with the way the course plays. Maybe I just have a lower tolerance from some of the trees.

For the Schocks, Freeport Mills has never really been about the money.

“It certainly wasn’t a big money maker,” said Schock. “It gave him something to do, like it’s giving me something to do. Of course, what else would I do? I can tell you it was a lot, as far as what he wanted to do. Up until he couldn’t walk, he would still go on a mower.

“He didn’t take vacations,” Schock continued. “He was here seven days a week, from eight until it got dark. It was more than a job for him. And my mother would be in the pro shop.”

One thought on “Death of a Golf Course?”