2 years ago
Because of Trees, Falcons Can’t See the Forest

WITMER – It’s important to take a step down and smell the coffee.

All that glitters is not silver.

The sun will come up on Sunday.

Or something like that. Well, you know what we mean. 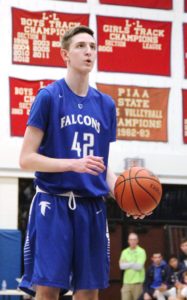 On Thursday night at Conestoga Valley, a bit of consolation and perspective seemed to be in order for the Cedar Crest boys’ basketball team, after it dropped a very un-Falcon-like 72-47 decision to Warwick, in the semifinals of the Lancaster-Lebanon League playoffs. The Falcons fell behind early, experienced difficulties defending the three-point stripe throughout and ended up surrendering a season-high point total.

The loss was the Falcons’ fourth in five outings, since starting the season 17-2. Cedar Crest, the runner-up from Section One, will carry that 18-6 overall mark and a number-four seed into next Friday night’s District Three Class AAAAAA opener, at home against an opponent still to be determined.

But no matter what happens from here on out – and the Falcons are far from done – this campaign must be considered a success. The District Three playoff appearance will be Cedar Crest’s seventh straight, and this season marks the seventh consecutive of 16 wins or more for the Blue and Gray.

During that span, the Falcons have won two Lancaster-Lebanon Section One championships and a pair of league titles. Cedar Crest boys’ basketball has gone from one of the least consistent athletic programs in Lebanon County to one of the most consistent.

For Section Two champion Warwick, now 17-6, it’s off to Saturday afternoon’s L-L League title game against Manheim Township. During the regular season, back on December 21st, the Warriors had beaten the Falcons 52-42 in Lititz.

“I don’t know how you measure success in the grand scheme of things,” said Tom Smith, who’s in his ninth season as Cedar Crest’s head coach. “But I think we’ve been a very successful program. We had some guys my first two years who really battled for the way the program is. That’s why tonight was a little disappointing.

“When the season’s over, there’s time to reflect on that,” continued Smith. “I love these kids. You grow in your relationships. My job is to drive them and have them reach their potentials. It’s satisfying, after the season. Now it’s day-to-day. There’s no time to take a step back and reflect on what we’ve accomplished.”

The Falcons trailed the entire way, after hot-shooting Warwick scored the first six points of the game. But behind the play and inside scoring of junior forward Jason Eberhart, the Falcons battled back to within 10-7 of the Warriors, with two minutes left in the opening stanza.

“I thought we were pretty evenly matched,” said Smith. “I felt good about where we were at. We spotted them six points at the start, and we were playing catch up the rest of the way. We did everything we could. We threw the kitchen sink at them. Confidence with momentum is a huge thing.

“I don’t know the last time we lost like this,” Smith continued. “This loss isn’t indicative of our guys.”

Down six points in the middle of the second quarter, Cedar Crest mustered a mini, Logan Horn-inspired 6-2 spurt to pull within 23-21 of the lead. But the Warriors outscored the Falcons 10-5 over the final two minutes of the half – including a buzzer-beating three-pointer by Kai Cipalla – to take a 33-26 advantage to the break.

“It was a combination of them playing well and us not,” said Smith. “They got to every loose  ball. Their shots were falling. We got good looks, but ours weren’t. They got a little bit of a lead and we had to do different things.

“This is isolated. This is different,” Smith added. “We played our butts off in those last three losses at the end of the season. We didn’t lay it on the floor like Cedar Crest teams do. We competed in the first half. The second half got away from us. It’s tough to compete when you’re down like that. But the sun will come up tomorrow.”

“He did play well,” said Smith of Eberhart. “Jason showed up for us tonight. We had a game plan to get the ball inside. He was solid out there tonight. He’s been solid for us all year long. He played a very good basketball game.

“We could’ve played better defense,” continued Smith. “We knew going in that they shoot the ‘three’. But the sense of urgency to get to the shooters wasn’t there. We knew coming in we’d have to defend and be in their chests.”

The third quarter was when things began to unravel for the Falcons, but not before Horn scored on a driving lay-up to pull his side to within 33-28 of the lead or before Eberhart maneuvered inside for a deuce to make it a 38-34 game. But over the next three minutes, the Warriors scored 13 unanswered points to open a 51-34 bulge.

Then when Cipalla threw in his second buzzer-beater, at the end of the third period, and teammate Colby Martin drained a three-pointer to open the fourth frame, the Warriors had themselves a 56-36 margin.

“This one might be easier to put behind us than the last three,” said Smith. “This wasn’t our best. We have no other option than to regroup.”