6 years ago
Who are These Guys? And What Have They Done with Campbelltown?

FREDERICKSBURG – One upset is a fluke. Two is a Cinderella tale.

Campbelltown is dancing, and the clock is nowhere close to striking midnight.

On Sunday evening at Earl Wenger Memorial field, underdog Campbelltown continued to be the story of the eight-team, double-elimination Region Four baseball tournament after pulling off its second shocker in as many days, a 10-3 triumph over Dallastown. After opening a 4-0 second-inning lead with the benefit of only one hit, C-town exploded for six runs in the top of the ninth inning.

With the result, inexperienced Campbelltown, now 15-9, barged into the tournament’s Undefeated Game against York County champion Pleasureville, which will be played at Earl Wenger Field on Monday at 7 p.m. Not bad for a club which wouldn’t have even qualified for the event if Fredericksburg hadn’t been hosting it.

Dallastown, the York County runner-up which was guilty of eight total errors, tumbled to 10-5-1 and into the loser’s bracket.

In addition, the outcome made Lebanon County clubs a combined 3-1 in the legion regional.

“We wanted to get a (one) win here,” said Campbelltown head coach Tim Morgan. “That’s why we saved the pitching we had. You’ve got to throw strikes and play defense to win games here.

“It (making it to the undefeated game) didn’t even enter my mind,” Morgan continued. “Because I know what kind of team is over there. Nineteen-year-olds against fifteen-year-olds, that’s four years more experience.”

“No, I’m not surprised,” said Coburn. “The keys have been timely hitting and good fielding. We’re playing good baseball. Everybody is doing their part. I threw strikes. I relaxed on the mound and and let my defense do its job.

“I had a lot of confidence coming in,” added Coburn. “I was thinking, ‘Just play our game.’ When we play our game, we play well.”

Playing with the lead took a little of the pressure off of Coburn’s right shoulder. Thanks in part to four Dallastown fielding miscues, Campbelltown scored four times over the first two frames.

In the top of the second, Campbelltown tacked on three times when Griffin Weidler walked and D-town couldn’t handle back-to-back sacrifice bunts from Sam Zeigler and Jake Roe. Wagner capped the rally with an RBI-single.

“We played small ball early and they couldn’t make the plays,” said Morgan. “You get a couple of runs and it was enough.

“I have no idea (if Dallastown took C-town lightly), ” continued Morgan. “I think they were out of pitching. How can you start a guy who can’t throw strikes?”

“The goal is to just continue to play good baseball,” said Coburn. “We have a lot of good pitchers who can throw.”

Campbelltown gave one of its gifts back in the bottom of the fourth, when Dallastown made it 4-1 on a couple of two-out errors. Then in the sixth, Dallastown pulled to within 4-3 by bunching a pair of hits with a double steal.

But Coburn more than settled down after that, retiring the last ten batters he faced. Employing a devastating knuckle-curve ball, Coburn collected a total of seven strikeouts, allowed just three hits and didn’t walk a batter during his complete-game effort.

“Who knows?,” said Morgan. “We had a majority vote that we were going to stay with him (Coburn). Things worked out. He sucked it up and went the distance.

“The way he threw for us this summer was the way he threw today,” Morgan added. “He was kind of limited for me. But it worked out. It’s nice to have three (Blatt and Sam Zeigler) like that.”

“Yeah, I was worried a little bit,” said Coburn, who threw about 35 knuckle-curves. “But how they scored was I was getting the ball up. The next couple of innings I kept it down.

“I use it (the knuckle-curve) as off speed,” added Coburn. “I throw it low and it drops. My change-up was also working well.”

If Campbelltown’s lead was precarious, it became much less so in the top of the ninth.

The six-run rally was sparked by Wagner’s lead-off single and Blatt’s towering RBI-triple to right field – and the daring Blatt raced home when the relay throw was bobbled.

After two outs were recorded, C-town re-rallied, as Braeden Drescher walked, and Zeigler, Roe and Coburn singled ahead of Wagner’s two-run safety.

“In legion, I struggled a little,” said Coburn of the regular season. “In my second two games I kept the ball low and it really helped. That’s what I did today.

“God is a big part of my life,” Coburn continued. “You can do all things through Christ.”

To purchase images in this article email jkfalk2005@yahoo.com, or to view more go to https://lebanonsportsbuzz.com/photo-gallery/, 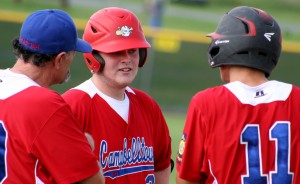