There’s a reason that some bigger schools want no part of the Beavers.

During Monday night’s opening round of the Lebanon Athletic Booster Holiday tournament, not only didn’t it back down, little Lebanon Catholic took down the host Cedars, 51-45 in a contest that might not have been as close as the final score indicated. Buoyed by foul difficulties for Lebanon High star Alexis Hill, the Beavers never trailed, and led by as many as 13 points in the second half.

With a fourth triumph in its last five outings, Lebanon Catholic, the reigning District Three Class A champions, moved to 5-3 overall and into Tuesday night’s 7:30 p.m. championship game of the holiday event, opposite Manheim Township, a 60-36 winner over Garden Spot. Class AAAA Lebanon High, now losers of four of its last five, slipped to 4-5 on the year and into Tuesday’s 6 p.m. consolation contest.

“My entire coaching career, that’s been key for us,” said Lebanon Catholic head coach Patti Hower of the experienced gained from playing larger schools. “That gets us ready for the postseason – in a nice atmosphere. It’s always good to play in front of the hometown crowd.

“It’s nice,” added Hower. “We don’t have to travel. Lebanon has always wanted us here. The Lebanon kids want to play us. And we want to play them.”

“They’re smart,” Brewer added. “They didn’t turn the ball over a tremendous amount. What I was impressed with was how they finished around the basket. Patti clearly drew up a defense that packed it in around the basket.”

Lebanon Catholic got out of the blocks quickly, tallying seven of the first eight points on two Neesha Pierre drives and a Mariah Sholly three-pointer. A subsequent 10-0 Beaver run, which featured another Sholly trey, a conventional three-point play from Pierre, a driving lay-in from Celine Mars and a bucket from Jayden Shellehamer, pushed their advantage to 17-3, 41 seconds into the second stanza.

“I thought we shot the ball well and we got some stuff in transition,” said Hower. “We’re not scoring a lot, a lot. But if they’re (the Cedars) not scoring, it helps us.

“If you’re averaging 39 points a game, and a person who is averaging 22 comes out, it’s going to hurt,” said Brewer of Hill’s foul problems. “It is what it is. They (his players) battled. They made some shots at the end. It was a fine cross-county, cross-city game.

“They’re (the Beavers) well-coached,” Brewer continued. “They play to a strength. They finish around the basket.”

The Cedars came to life early in the second quarter when Maddy Hartman ignited an 11-0 spurt that got the home team within 17-14, on Hill’s three-point play. Along the way Hill canned seven straight free throws and Hartman drained a pair.

But Hill picked up her third foul with 45 seconds remaining in the second period, and Lebanon Catholic enjoyed a 22-17 advantage at the break.

‘We didn’t play well in that second quarter,” said Hower. “I bet five straight possessions we didn’t get a shot. But they (her players) hung in there.

“You’ve got to play in games like this,” Hower continued. “This is definitely going to help us down the stretch. I was proud of how we executed our game plan defensively. I thought we did a pretty nice job on Hill. Last year, she just toasted us. But I think they (the Cedars) learned something from this game too.”

“When you take away the most athletic player on the floor, it affects you, offensively and defensively,” said Brewer. “When you get fouls early, it takes away things you can do. She’s young. We told her, ‘You’ve got to save some of those fouls till the end. You can’t go for every steal.’

“Obviously it hurt us,” continued Brewer. “But I was proud of the kids. I challenged them, and they responded. We still battled.”

The emerging Pierre paced Catholic with 18 points, while teammate Sholly popped for 11 points and Allison Warren struck for ten. Maddy Hartman registered 13 points for Lebanon High, and Hill recorded ten, before fouling out with 2:26 to go.

Lebanon Catholic, which made good on only 11 of 26 free throw attempts, outscored the Cedars 23-15 when Hill was on the bench with her fouls.

“At practice we talked about that we could win,” said Hower. “But we couldn’t take it for granted. We said if Hill was going to go off and get 25 (points), we’d be in trouble. I was happy with our defense. We talked. We knew where people were.

“That (Hill’s foul trouble) helps,” Hower added. ‘That definitely helps. You could see that we had some uplifting when she went out.”

“Fouls were a problem the first few games,” said Brewer. “I commented to the girls that our fouls have been down. With her being quick and athletic, you can’t bottle her up completely. That’s her game.”

The Cedars were within 29-22 of the Beavers, three minutes into the second half, thanks to a three-pointer from Jasmine Turner. But Pierre scored twice on two hard ‘takes’ to the hole and Warren converted an inside maneuver, as Lebanon Catholic closed the third quarter with a 6-0 spurt and a 35-22 cushion.

“We kind of let them (the Cedars) slip back in there, but we didn’t fold,” said Hower. “Sometimes I have to remind myself they’re (her girls) just sophomores. I give them (the Cedars) a lot of credit. They stepped up when Hill went out of the game. They had people making shots.

“Neesha is a tough match-up too,” added Hower. “They had to put Hill on her. Her shooting has gotten much better.”

“It’s games. Just playing in games,” said Brewer of the Beavers’ progress. “It’s just getting game experience and facing adversity. She (Hower) does a great job of teaching that.”

With Hill in the game, Lebanon outscored Lebanon Catholic 14-7 over the first five minutes of the final quarter, and moved to within 42-36, courtesy of an inside bucket from Ary’Anna Ortolazo, with 2:30 remaining. But Hill fouled out seconds later, the Beavers regained their momentum with a Celine Mars three-point play and Lebanon Catholic proceeded to make good on seven of 13 foul shots in the closing seconds.

“We’re learning. We’re growing,” said Brewer. “We’re facing some adversity with tough losses. But in the big picture, we’re a young team and we’re tied for first place in our section (Two of the Lancaster-Lebanon League). The section is our ultimate goal. We’re where we need to be. But we’re not where we want to be.”

To purchase images in this article email jkfalk2005@yahoo.com, or to view more go to www.http://lebanonsportsbuzz.com/gallery-ten/. 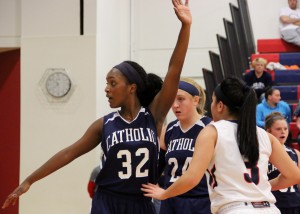