7 years ago
Annville Shows Myerstown is Human – and Vulnerable

Now what the series has come to down is a question of whether not Annville can hold on to that momentum. And whether or not Myerstown can regain the fleeting intangible.

The outcome sliced Myerstown’s advantage in the title set to 2-1. Game Four of the series will be played on Wednesday at 5:45 p.m. at Annville-Cleona High School.

The triumph was Annville’s first in six tries this season against Myerstown, and it snapped Myerstown’s 15-game win streak. Annville is now 13-7 overall, while Myerstown slipped to 18-2.

“I would say although we won, I think that they think they have the momentum,” said Annville head coach Steve Hostetter of his counterparts. “I’m not sure we don’t have the momentum. I’m not counting this team out of anything. They (his players) responded the way we needed them to. No matter what happens, at least we didn’t get swept.”

“No, it’s their’s,” said Myerstown head coach Johnny Mentzer of Annville and the momentum. “They got momentum in the rain-out (on Monday). The weather and this loss gave it to them. We were sitting here doing nothing. I feel like I keep saying this over and over, but it’s the consecutive days thing. We can’t get into a groove. It’s hard to stay on top of your game when you don’t play consecutive days. We left a lot of guys on base. That gets to me.”

Rodkey’s route-going effort was just as much about intestinal fortitude as it was talent.

Up a run in the bottom of the seventh, Rodkey was over a hundred pitches when M-town third-place hitter Tyler Starry ripped a shot off him that a diving Annville rightfielder Taylor Prentice could come up with. Instead of settling for a double, Starry tried for third, but was easily gunned down there by a Adam Connor-to-Braden Elliott-to-Adam Bennett relay.

Myerstown’s next batter, Chris Krieder singled up the middle, before Rodkey closed out the victory by inducing a fly-out.

“We have the best outfield in the league, defensively anyways,” said Hostetter. “We can play with anyone. Taylor dove for it, but Adam backed him up and made a good throw to Braden. We still had to make the play. But it was picture perfect.”

“No, I don’t believe in the law of averages,” said Mentzer. “Two plays. Take those two boneheaded mistakes out of the game and it’s a different outcome. There are no excuses for mental mistakes. I can not handle mental mistakes. Physical mistakes are different. I can deal with errors. That was a lack of focus on two plays in two key situations.

“When you don’t communicate in the outfield and you make a boneheaded baserunning error when you’re the tying run in the bottom of the seventh, I have a problem with that,” added Mentzer. “We won 15 games in-a-row because we haven’t made mental mistakes.”

Rodkey showed why around the league he has earned the reputation of ‘Big Game Mitch’.

He held the circuit’s most potent lineup to eight hits by going toe-to-toe with it and simply battling. Rodkey stranded nine Myerstown runners on base, struck out six and walked four.

“We were up against a wall,” said Hostetter. “We’ve got to win every night. But I thought we responded well. Mitch threw a great game. He kept their big hitters in check.

“He’s proven himself,” Hostetter continued. “He’s definitely our number-one pitcher. I’m not saying we don’t have other kids who can pitch. But if we’re going to play a one-game series, he’s the guy I want to have on the mound.”

“Nothing overpowering,” said Mentzer of Rodkey. “He changed speeds and threw a lot of breaking balls. He probably didn’t have the control he would’ve liked. But he’s a gamer. He’s going to throw seven innings because he’s a competitor.”

All of the game’s runs were scored in the fifth inning. Annville entered the frame having scored just one run in 18 championship series innings against Myerstown pitching, and it was a miscommunication between the M-town leftfielder and centerfielder that helped snap it out of it.

That misplay of a fly ball placed Annville runners on second and third, and a subsequent Rodkey single loaded the bases. Annville clean-up hitter Robbie Beidler struck the key blow when he unloaded on a Jake Stager offering for a double that plated a pair of mates, and an out later, Elliott’s run-scoring single made it 3-0 Annville.

“That’s an understatement,” said Hostetter to the notion his batters had been scuffling at the dish. “I kind of shook up the lineup a little bit. At this point, I didn’t think there was any harm in trying. I think we broke out of it a little bit. That (Beidler’s double) was a clutch hit. We needed something to wake us up.

“I thought he (Stager) threw pretty well at the beginning of the game,” added Hostetter. “We had some opportunities. But I thought he did a nice job. I thought Johnny made the right move (replacing Stager with Austin Douple) when he did. He (Stager) was leaving everything up. He was starting to get tired.”

“He came into the dugout and said, ‘I’m soaked in sweat,'” said Mentzer of Stager. ” ‘I can’t get a grip on the ball.’ That’s when I thought he lost a little control, with the moisture on his hand. He’s going to give me a great effort every night. He pitched well enough to win. It’s not the result Jake deserved, for sure.”

Myerstown tallied both of its runs in the bottom of the fifth.

Douple opened with a walk, and then after Rodkey recorded two outs, Starry kept the rally going with a single. Kreider followed an RBI-single, as did Kyle Bogdonovich.

“I think our confidence was up,” said Hostetter. “We had Mitch on the mound. He’s done well for us all year. Anything can happen. Until the final out is made, we still have a chance.

“If we do win the next game, the pressure reverts back to them,” Hostetter continued. “Hopefully we’ll play with the same intensity as tonight.”

“They won’t quit,” said Mentzer of Annville. “Steve’s too good of a coach for that. They’re not going to lose motivation. The day off gave them a chance to regroup and refocus. They’re going to give you max effort, every time out.” 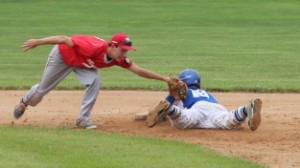