6 years ago
Little Dutchmen on Verge of Something Special

The Annville-Cleona field hockey team improves to 8-1 with an 8-1 victory over neighbor Northern Lebanon. ♦

FREDERICKSBURG – Things are going so well for the Annville-Cleona field hockey team right now that it’s experiencing difficulty fully wrapping itself around the meaning of its success. The Little Dutchmen are so focused on the moment that they haven’t afforded themselves the opportunity to take a step back and appreciate it.

In fact, they don’t even like thinking about it or talking about it for fear it might somehow jinx it – that they could cause the proverbial other shoe to fall.

But what the Little Dutchmen are fostering isn’t that kind of success. It’s the type of success that is rooted in hard work.

On a warm Wednesday evening, Annville-Cleona continued to build upon its rare – dare we say unprecedented – success with an 8-1 demolition of Northern Lebanon. The Little Dutchmen netted a pair of goals on their first two shots, in the opening 6:35 of the contest, and never really stopped bringing the noise.

In all, five different Little Dutchmen attackers found the back of the net, including prolific senior Michaela Singer, who registered a hat trick and an assist. Lauren Schrader potted a pair of A-C tallies, while teammate Katelyn Brightbill collected a goal and three assists.

Annville-Cleona out shot Northern Lebanon by a whopping 34-4 margin.

With the win, the Little Dutchmen upped their overall mark to 8-1 and their Lancaster-Lebanon Section Three record to 4-1. The result dropped the Vikings to 2-7 on the year and 2-4 in the circuit.

This season, Annville-Cleona has now outscored its opponents by a combined margin of 39-4.

“There’s so many changes that happened with the classifications,” said Annville-Cleona head coach Sue Felty. “There’s a lot of changes to the section. I knew we had a chance at winning our section if we played the way we’re capable of playing. We’re not super deep and that’s a concern, so we’ve got to be conditioned. We’d like to make a run in districts. But I’m very superstitious. I don’t like talking about the future.

“They (her players) work hard,” continued Felty. “They go out there and do what we ask them to do. Some of these girls spent a lot of the summer lifting and working out, and I think it’s paid off for them.”

“It was clearly a combination of both (the Little Dutchmen playing well and the Vikings not so much),” said Northern Lebanon first-year head coach Ronda Sowers. “Annville-Cleona is a highly talented team. We certainly didn’t do many of the things we’re capable of doing well. It should’ve been more of a game, but we were playing the top team in our section. Last week we made some improvements. I thought we made enough strides to give Annville-Cleona a game. 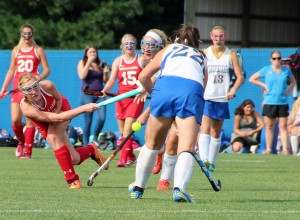 “Sure, we’ve always felt it was a rivalry with Annville-Cleona,” Sowers added. “We have to figure out how to get them (her players) to light their own fires. But we’re always looking to beat Annville-Cleona.”

The Little Dutchmen wasted precious little time getting after the Vikings.

Less than three minutes in, Little Dutchman Brightbill dumped a high ball into the Northern Lebanon goal mouth. Singer beat her defender to the ball, got her stick on it and dribbled it past Viking net-minder Hannah Whitman.

Four minutes later, Annville-Cleona scored in a similar fashion when Schrader ran on to a ball crossed from the left side of the field by Brightbill. Schrader didn’t bother to control the pass, instead simply one-timing it into the cage.

“We played pretty well,” said Felty. “We had some defensive lapses. But when you score that many goals you’ve got to be doing something right. We seem to go in bursts.

“We’ve just been trying to focus on following shots and being there off the pads,” Felty continued. “That’s something we want to improve on and did well today. They (her players) definitely have skills there (in the circle). It’s hard to see them not using them.”

“There’s a combination of different breakdowns that occurred,” said Sowers. “The first ball was a ball that came into the circule. They (the Little Dutchmen) got past us and got a shot off. The second goal, they came into the circle uncontested. After that, it was a blur. Annville-Cleona is going to score goals, but we didn’t expect them to score eight. The other side is we’ve got to respond.

“I think it’s always demoralizing when a team scores in the first five minutes, much less two goals in the first seven minutes,” added Sowers. “We had to blow a timeout early. We expected them (the Little Dutchmen) to score, but we didn’t expect it to be 2-0. And we did not respond well to that.”

Annville-Cleona enjoyed a 4-0 advantage at the break, thanks to goals from Morgan Zimmerman and Brightbill less than five minutes apart late in the first half.

Off extended corner pressure, Zimmerman tipped a Singer feed inside the right post. And Brightbill made good on a well-placed drive from just inside the circle to the far post.

“We don’t want them to let up,” said Felty of her charges. “We shifted some people around. We moved some forward players to midfield to get a sense of what it’s like to play that position. Sort of a sense of empathy. I don’t ever want to run up the score. But I don’t ever want them (her players) to think they can turn it off and on.

“At halftime, I just said, ‘Keep your intensity up’,” added Felty. “I wanted them to play at their speed and not slow down.”

“After the game we talked about it,” said Sowers. “We are the type of team that needs all 11 players to show up on the same day. We did many things well. We controlled the ball, but not consistently. We marked in the circle, but not consistently. They’re (her players) developing skills. But I felt today wasn’t a step in the right direction.”

Northern Lebanon injected a degree of competitiveness into the contest by notching a goal 1:55 into the second half. Out of a corner, Baylee Madilia shuffled a pass to Carrie Shuey, whose drive beat Annville-Cleona goalie Haley Zimmeran to the short side.

It took the Vikings less than five minutes to respond, as Emily Feibig scored on a third try from a scramble that ensued from a corner. Northern Lebanon’s sixth tally also came from a ‘stick-with-it’ play, this one from Singer.

“So far so good,” said Felty. “There’s a lot of section play to go. It’s way, way too early to make predictions. Sometimes one loss can do you in. But we’re looking forward to what’s coming up.”

“I think we’re just in a place where we’re still growing,” said Sowers. “We start two freshmen and six sophomores. The majority of the kids are underclassmen. There’s a learning curve, and unfortunately some of that learning has to be done during games.

“Not including today’s performance, we’re relatively pleased with the progress we’re making,” Sowers continued. “We expected Annville-Cleona to come in guns loaded and ready to go. We’re moving forward. I expect in three weeks to play differently.”

Singer completed her hat trick courtesy of another unassisted tally with 17:33 remaining, while Schrader and Brightbill collaborated on the Little Dutchmen’s final goal midway through the second half.

“I know they have a really young team,” said Felty of the Vikings. “They never gave up. They came after us in the second half. They kept plugging away.”

“We’ll take from this what we can and we’ll move forward,” said Sowers. “Specifically, we want to establish some tangible stick skills. We want to handle the ball better, both passing and receiving. I expect that we’re going to win a few games from here on out. We just have to keep improving, but also we want to get some wins. We’ve got to expect to win.”