ANNVILLE – Not as good as a win. Not as bad as a loss.

Nobody likes a tie. Sports is, after all, a result-based pursuit.

But in this particular instance, it was the most equitable of outcomes.

On an immaculate Thursday after-school at Annville-Cleona High School,  the Little Dutchmen girls’ soccer squad and visiting Lancaster Country Day fought to a well-deserved 1-1, double-overtime draw. After the sides traded goals in the contest’s first 13 minutes, they battled throuh 87 minutes of score-less, but action packed, soccer.

The outcome – or non-outcome – left Annville-Cleona 4-3-1 on the season and 3-2-1 in Section Four of the Lancaster-Lebanon League. In the latest District Three Class A power rankings, the Little Dutchmen were situated sixth.

The result made Lancaster Country Day 3-4-1 overall and 2-4-1 in the section.

“It keeps us in the hunt for the playoffs in single A,” said Annville-Cleona first-year head coach Jim Blouch. “I don’t know if it helps us or hurts us. We’re hoping districts will be the result of our season. A win definitely would’ve helped us.

“From past experiences, I curbed my idea of expectations,” Blouch continued. “It takes some time to instill excellence in a program. We’re not there yet, but hopefully we will be. My simple goal was to continue to improve throughout the season. As long as we’re doing that, that’s what we want.”

For the most part, the play was even and back-and-forth throughout. Each team generated its share of scoring opportunities, which included breakaways, semi-breakaways and hard shots that sailed wide.

Both keepers – Alyssa Ulrich for the Little Dutchmen and Anna Sotirescu for the Cougars – held up well under pressure.

“It was a game I thought we should’ve handled,” said Blouch. “We didn’t capitalize on our chances. We had our opportunities, and I thought the girls played well in overtime. It was a well-fought game on both sides. Both teams battled. It was a fairly equal contest.

“I think the girls were physically challenged towards the end,” added Blouch. “Both sides created opportunities. I thought both sides had a chance to score that winning goal. It was somewhat of an exciting game.”

Annville-Cleona grabbed a 1-0 lead just 3:15 into the match.

From the right wing, Little Dutchman Emily Brown-Suarez played a high ball into the Panther goal mouth. And when the Lancaster Country Day defense failed to clear the ball, A-C’s Mia Bucher was there to deposit it into the back of the net.

“We crossed it in front,” said Blouch. “On the far side, our midfielder, Mia Bucher, got a hold of it. She did a nice job.

It took Lancaster Country Day exactly 9:18 of game clock to come up with an answer.

On the left side of the field, Cougar Florence Schaumann crossed a ball towards the Annville-Cleona, and the active Ulrich came off her line to play it. But the ball slipped out of Ulrich’s gloves and fell to the ground, where LCD’s Julia Mocny was positioned perfectly to blast it home.

“I thought our four defenders did a nice job,” said Blouch. “There was one defensive mistake and that ended up being a goal.”

“I’m pleased with the girls,” said Blouch. “It’s a good group. They respond to what I tell them. They’re willing to learn the game.” 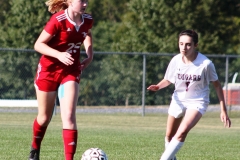 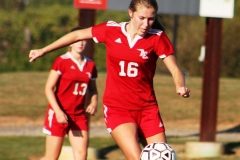